SGI Leader Elucidates Buddhist Humanism, the Value of Dialogue and the Mentor-Disciple Relationship 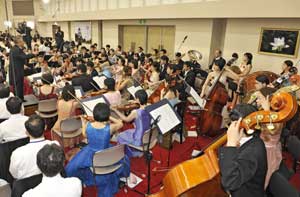 The meeting featured a performance by the Soka Gakkai Kansai 21st Century Symphony Orchestra and the Kansai Men's Chorus. The Kansai 21st Century Symphony Orchestra was established on January 16, 1995, the day before the devastating Great Hanshin Earthquake in the Kansai region. Since then, it has collaborated with artists from Japan and 13 other countries for goodwill concerts that began with a desire to encourage and support quake victims and the revival of the quake-hit areas.

Mr. Ikeda began his remarks by assuring the audience that the practice of Buddhism enables people to triumph over all adversity and lead victorious lives. Faith, he said is of crucial importance, and urged them to deepen their conviction during these times of turbulent change.

In tribute to the Soka Gakkai's Arts Division members in attendance, he spoke briefly about the life and principles of the Japanese painter Shoen Uemura (1875-1949), describing her determined struggle to overcome prejudice and discrimination in a male-dominated field. Quoting various words of Uemura, including her belief that "lofty art is created by a lofty spirit," he described how hardships are the source of inner strength.

"Real happiness is not the absence of any problems, difficulties, or suffering," he said. "Whenever you find yourself beset by some new harsh trial, adopt a positive attitude and face it bravely as an opportunity to strengthen yourself. This is the Soka Gakkai spirit. It is a way of life that embodies the very essence of Nichiren Daishonin's Buddhism. This fighting spirit, this willingness to take on a new challenge, is the key to true happiness, victory and fulfillment."

Mr. Ikeda then reported on several of his recent dialogues with leaders and thinkers from throughout the world that are currently being serialized in various Soka Gakkai-affiliated magazines and journals. These dialogue partners include former United Nations Under-Secretary-General Anwarul K. Chowdhury; Dr. Zhang Kaiyuan, Chinese historian and former president of Huazhong Normal University; Rector Mikhail Z. Zgurovsky of the National Technical University of Ukraine; and Dr. Lou Marinoff, founding president of the American Philosophical Practitioners Association. The number of Mr. Ikeda's published dialogues is nearing 70.

The SGI leader went on to talk about the nature of dialogue and the need for leaders to develop a generous and open spirit that puts others at ease and enables them to freely speak their minds. "Speaking in an easily comprehensible way that reaches people and touches their hearts--this is a vital point for a successful dialogue and an important quality for leaders to have," he remarked.

Mr. Ikeda also reported that the ongoing serialization of his novel The New Human Revolution in the Soka Gakkai's newspaper Seikyo Shimbun, is now approaching its 4,000th installment, 15 years after he began writing it. The New Human Revolution is a historical novel detailing the history of the Soka Gakkai, including the struggles of numerous pioneer members around the world, and has been described as a handbook of Buddhist leadership. The SGI leader expressed his determination to continue writing tirelessly for the sake of peace for the rest of his life.

Saying that action is the essence of Buddhism, Mr. Ikeda talked about the painstaking efforts of Nichiren, the founder of Nichiren Buddhism, to meet and speak with individuals, traveling around Japan to do so. He further described the efforts of second Soka Gakkai president Josei Toda to support his mentor, first Soka Gakkai president Tsunesaburo Makiguchi, and his own efforts to support Mr. Toda. "The mentor-disciple bond between Mr. Makiguchi and Mr. Toda is the reason that the Soka Gakkai today exists, and the mentor-disciple bond I share with Mr. Toda has been the bedrock of the Gakkai's growth," he affirmed, pointing out that this year marked the 61st anniversary of his first encounter with Mr. Toda. He described the arduous efforts he made during his youth, under Mr. Toda's tutelage, to develop the organization and protect it from its detractors and encouraged the youth members particularly to develop a similar sense of active responsibility.

"In every respect, our organization has a solid foundation," he said, pointing to the global development of the SGI today. But if we take that for granted," he continued, "the Soka Gakkai will stop growing and degenerate into elitist Buddhism--in other words, a self-absorbed and self-centered Buddhist practice indifferent to the happiness of others." He described the "path to peace" and the essence of the SGI's pacifism as a spirit "to not fear hardships, but to even summon them forth, challenge them head-on, and win."

He attributed his success in forming ties with numerous world leaders and thinkers and in promoting dialogue for peace to the training he received in his youth from Mr. Toda. He asked his fellow SGI members to continue these efforts to expand and strengthen ties of friendship.

"The age now belongs to the youth. We must entrust the future to our young people," he declared, urging the organization's leaders to devote themselves to fostering capable youth.

[Adapted from articles in the October 29 and November 2-3, 2008, issues of the Seikyo Shimbun, Soka Gakkai, Japan]