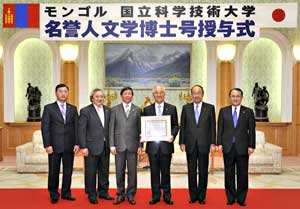 On October 29, 2008, Mongolia University of Science and Technology, Ulaanbaatar, conferred an honorary doctorate in humanities upon Daisaku Ikeda, Soka University founder, in recognition of his contributions to international friendship, education and the promotion of peace and nonviolence. The presentation took place at the Soka University Central Tower in Hachioji, Tokyo. Mongolia University of Science and Technology President Bayanduuren Damdinsuren entrusted the certificate for Mr. Ikeda to Soka University President Hideo Yamamoto, who accepted it in proxy. Also attending from the Mongolian university were University Vice-President Tudev Batbayar and Mr. Ulziibat Batbaatar of the university's Office for International Cooperation.

The Mongolia University of Science and Technology is one of Mongolia's leading state universities, with campuses in the provinces of Darkhan, Erdenet, Uburkhangai, and Sukhbaatar, as well as Ulaanbaatar. Currently, around 20,000 students matriculate in its 17 professional schools and colleges, three research institutes and 36 experimental and technology centers in undergraduate through doctorate programs. The university conducts academic exchanges and collaborates on research with over 160 academic and scientific institutions overseas.

In his citation, Prof. Damdinsuren paid tribute to the contributions made by Mr. Ikeda and the SGI toward enlightening people--especially the younger generation--to the urgency of promoting sustainability, environmental preservation and a culture of pacifism rooted in mutual respect and humanistic ideals. He described the age-old friendship between the people of Mongolia and Japan, which presently flourishes through exchanges in engineering technology, culture, education, performing arts and sports, and said that the conferral of the honorary doctorate upon Mr. Ikeda, who has endeavored to foster in people the ideals of world peace, mutual trust and friendship, is emblematic of this friendship.

In a speech read by a representative, Mr. Ikeda said he accepted the distinction with heartfelt appreciation, recognizing that the honor comes with a deep responsibility. He expressed admiration for the Mongolian university's dedication to the pursuit of excellence as a center of leading-edge scientific technology, based on training of exceptional individuals. Saying that everything depends on fostering the human being, he recalled British historian Arnold Toynbee emphasizing, during their dialogue, the vital need for the individual, the wielder of scientific technology, to develop ethical perspectives that are "high enough to ensure that he will exercise his enhanced power for good, not for evil." Mr. Ikeda concurred with Prof. Damdinsuren's stated belief that twenty-first century scientists must carry out scientific research with profound awareness of their moral and social responsibility.

He also congratulated the Mongolian university for the success of its student, Tuvshinbayar Naidan, a 24-year-old judoka, who won a gold medal in men's judo, the country's first ever Olympic gold medal.

[Adapted from an article in the October 30, 2008, issue of the Seikyo Shimbun, Soka Gakkai, Japan]