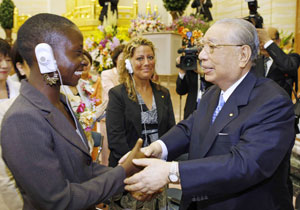 On September 3, 2008, Daisaku Ikeda, SGI president, attended a monthly Soka Gakkai leaders meeting at the Tokyo Makiguchi Memorial Hall in Hachioji, Tokyo. SGI youth from 60 countries and territories who were in Japan for a leaders training session also attended.

Mr. Ikeda began his remarks by warmly welcoming the visiting youth. The purpose of faith, he affirmed, is to create a joyous environment, to allow people to move forward with a sense of freedom and expansiveness, bringing their potential to bloom; and it is the goal of the SGI movement to enable people to lead the very best lives as human beings. He urged SGI members to cultivate beautiful bonds of friendship in their lives and to develop the capacity for straightforward heart-to-heart communication with others. This is only possible, he said, when individuals are able to overcome "narrow and closed mental states" such as cowardice and envy.

Saying that to examine and discuss the life and ideas of philosophers and literary figures from throughout history can lead to fresh insights and discoveries in faith, Mr. Ikeda went on to talk about the Danish philosopher Søren Kierkegaard (1813-55), and his experience of defending his reputation from the attacks of a satirical weekly review and scandal sheet The Corsair. Kierkegaard's friends failed to rise to defend him from this public ridicule, while jealous rival scholars happily applauded the attacks. This treatment spurred Kierkegaard into a period or prolific writing, which has helped establish his contemporary reputation as a philosopher of note. He later wrote of this time, "The abuse that society inflicted on me would very likely make most people unable to produce anything, but it only made me more productive."

Quoting Kierkegaard's words, "producing was my life," Mr. Ikeda encouraged the audience to bring forth their own inner creativity in the face of trying circumstances. The SGI leader described how he has used his own experience of being attacked and maligned by detractors as a driving force in his efforts to further develop and expand the Soka Gakkai's movement.

Quoting Kierkegaard again: "Anyone who wants to be victorious without struggling, anyone who wants something but does not want the means is a fool in people's eyes," he affirmed that difficulties are inevitable to those who advance, and that success in any endeavor can only be assured through a willingness to take action. Continuing on this point he spoke of the need for individuals to overcome cowardice and to cultivate wisdom, which is the point of Buddhist practice. It is by becoming stronger and wiser and more united that people can avoid being exploited by those in authority. "Creating such a just and principled world is the real purpose of the Soka Gakkai."

Referring to the American poet Walt Whitman's (1819-92) preface to the first edition of Leaves of Grass that described a truly humane and democratic world as one in which the president of a nation took his hat off to the common people, and not the other way around, Mr. Ikeda reiterated that it is the people who are the most respectworthy. "In a genuine democracy, there's no need for the people to kowtow to their leaders; leaders should show respect to the people and serve them faithfully."

Addressing members of the Soka Gakkai's Doctors Division and the Nurses Groups, Mr. Ikeda then introduced a number of perspectives on the humanistic attitude of good physicians, quoting the American journalist and medical professor Norman Cousins (1915-90) and Dr. Felix Unger, an Austrian heart surgeon and president of European Academy of Sciences and Arts, with whom the SGI leader has held dialogues. Further illustrating these points he related the description of the renowned physician Bian Que (Pien Ch'iao) from the Chinese classic Records of the Grand Historian by Sima Qian (Ssu-ma Ch'ien; c. 145-86 BCE).

Ending his talk, Mr. Ikeda called on the SGI members to exert themselves in the service of others and of peace in society. This exertion, he affirmed, is the essence of the shared commitment of mentor and disciple in Buddhism.