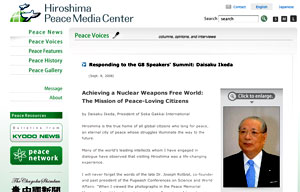 The Chugoku Shimbun, a Hiroshima daily newspaper, has published an editorial by SGI President Daisaku Ikeda responding to the summit meeting of the lower house speakers of the G8 nations held in the city in September.

In "Achieving a Nuclear Weapons Free World: The Mission of Peace-loving Citizens," published on September 8, 2008, Mr. Ikeda writes about Hiroshima's place in the world as the symbolic home of peace, describing the life-changing impact that visits to the city, and particularly its Peace Memorial Museum, have had on many leading intellectuals with whom he has exchanged views. It is important, for this reason, that world leaders visit the city and contemplate the destructive power of nuclear weaponry, he says, describing the significance of the recent meeting there of the leaders of the legislatures of the G8 countries and their consequent agreement to maintain and further strengthen the Nuclear Non-Proliferation Treaty.

Lamenting the slow progress made over the last six decades toward nuclear disarmament and the current ominous threat of nuclear proliferation, Mr. Ikeda goes on to describe several hopeful signs of a growing momentum toward a transition away from a nuclear arms-based security regime. Emphasizing the importance of a firm commitment to complete nuclear abolition, he states, "History teaches that even the seemingly impregnable institutions of slavery, apartheid and the Cold War order all came to an end. Nuclear abolition, too, can surely be realized through tenacious efforts by people sincerely devoted to peace who join forces together."

The essay can be read in both English and Japanese at the Hiroshima Peace Media Center website, under the "Peace Voices" section:

[Adapted from a report by the Soka Gakkai International Office of Public Information, Tokyo]