40th Anniversary of Proposal for Normalization of Sino-Japanese Relations 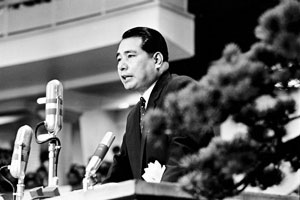 September 8, 2008 marked the 40th anniversary of Daisaku Ikeda's proposal for the normalization of diplomatic relations between China and Japan--a far-reaching call made at a gathering of over 10,000 members of the Soka Gakkai Student Division in 1968.

To commemorate the event, the Soka Gakkai Student Division sponsored lectures and forums in their respective locales. Leading figures from various sectors of Japanese and Chinese society spoke at these occasions or sent congratulatory messages.

Mr. Ikeda made his proposal in 1968, believing that the normalization of relations between the two former adversaries would be essential for peace in Asia and the world. The proposal was controversial and made Mr. Ikeda a target of right-wing elements in Japan, but it played a direct role in the eventual restoration of diplomatic relations between Japan and China in 1972. 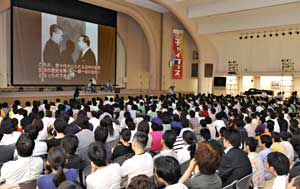 On September 7, 2008, student members in the Tokyo Metropolitan area sponsored a Sino-Japanese Students Peace Forum at the Tokyo Toda Memorial Hall in Sugamo. Journalist Kazuteru Saionji spoke at the event, describing the intensity of anti-Chinese and anticommunist sentiments throughout Japan at the time. Mr. Saionji said Mr. Ikeda's call for normalization of bilateral relations was a courageous step made at great personal risk that opened the way for friendship between China and Japan. The journalist also applauded Soka University for opening its doors to accept the first students from communist China to Japan, commenting that this act was an affirmation of the friendship Mr. Ikeda extended to Chinese Premier Zhou Enlai.

Chinese Ambassador to Japan Cui Tiankai, in a message expressing his appreciation to Mr. Ikeda for his proposal, reflected on his three meetings with Mr. Ikeda since taking his post in October 2007. Ambassador Cui said he was deeply impressed by Mr. Ikeda's astute and insightful perspective on Sino-Japanese friendship and his broad-minded vision for humanity's future. He hoped that under Mr. Ikeda's leadership, SGI members would continue to contribute to the strengthening of Sino-Japanese ties.

Ikuo Hirayama, president of Niigata University of International and Information Studies, was the guest speaker at an event hosted by students in Niigata Prefecture on the same day. Commenting that goodwill between Japan and China is the key to peace in the broader region, he asked those gathered to accept a sense of responsibility for the future of the region and develop a sound perspective on history that will enable them to see past conflicting interests.

A commemorative forum held on September 14 at Soka University in Hachioji, Tokyo, titled, "The Past, Present and Future of Sino-Japanese Relations," featured three experts in diplomacy between China and Japan: Professor Wang Jisi, dean of the School of International Studies at Peking University; Professor Jin Xide, deputy director of the Institute of Japanese Studies at the Chinese Academy of Social Sciences; and Professor Satoshi Amako, dean of the Graduate School of Asia-Pacific Studies at Waseda University in Japan.

Professor Jin, a leading authority on Japanese studies in China, said he admired Mr. Ikeda for the courage, insight and assessment behind his 1968 proposal. Analyzing the proposal's significance, he commented that it transcended existing frameworks of diplomacy at the time and created a great current toward normalization. Professor Jin appealed for Sino-Japanese cooperation with a broad vision of building international systems--beginning with the East Asian region--to solve global issues such as environmental degradation and achieve stability in the international community.

[Adapted from articles in the September 8 and 15, 2008, issues of the Seikyo Shimbun, Soka Gakkai, Japan]