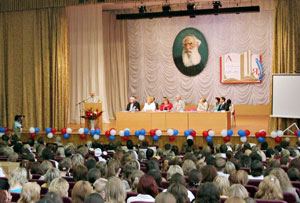 Vladimir Tolstoy, great-great grandson of Leo Tolstoy (1828-1910) and director of the Leo Tolstoy museum estate, announced during the author's 180th birth anniversary celebrations in Russia that SGI President Daisaku Ikeda would be one of two inaugural recipients of The Time of Tolstoy Award for perpetuating Tolstoy's spirit of love for humanity.

On September 8 and 9, 2008, Tula State L.N. Tolstoy Pedagogical University (TSPU) in Tula, Russia, and the Tolstoy's museum estate "Yasnaya Polyana" cosponsored an international conference commemorating the Russian literary giant's birth. The event was hosted by TSUP and supported by the L.N. Tolstoy State Museum in Moscow, the Russian Ministry of Education and Science and the Ministry of Culture.

An SGI delegation, headed by Soka Gakkai Vice President Kosaku Eto, representing SGI President Daisaku Ikeda, together with L.N. Tolstoy State Museum Director Vitaly B. Remizov and over 600 scholars and students, attended the opening session at TSPU. On the second day, the venue moved to Yasnaya Polyana, where Tolstoy was born and spent the majority of his life. The estate is now a national monument and memorial housing Tolstoy's personal effects and his extensive library; it is also the site of his grave, which is surrounded by an extensive white birch forest. A "Discourse on Tolstoy" seminar, sponsored by Tolstoy researchers and scholars, was held in the estate's front garden with an audience of some 300.

In a message read at the event, Mr. Ikeda said he was honored to help celebrate the birth of Leo Tolstoy, whose works he pored over in his youth and from whom he has received countless inspirations. Expressing his deep reverence for the Russian writer, Mr. Ikeda described Tolstoy as the immortal spiritual influence on untold thinkers past, present and future. Great figures famously influenced by him include Henry David Thoreau, Mahatma Gandhi, Martin Luther King Jr., Albert Einstein and Nelson Mandela. Mr. Ikeda said he counted himself as one of many who have been touched by Tolstoy's philosophy. He also applauded Yasnaya Polyana Director Vladimir Tolstoy for his dedication to keeping alive the Russian writer's vision.

Remarking that September 8, 1974, was the day he first set foot in Russia, Mr. Ikeda recalled that his decision to visit the country had arisen from a deep desire to bridge the East-West divide by fostering cultural exchange and opening a way to peace. In closing, he pledged to continue to talk and write about Tolstoy's life and philosophy, and to advance peace, education and culture in the spirit of Tolstoy.

During a press conference on the afternoon of September 9, Mr. Vladimir Tolstoy announced the creation of The Time of Tolstoy award commemorating Tolstoy's 180th birthday. The award, he said, would be presented annually by Yasnaya Polyana, beginning in 2008, to one Russian national and one foreigner deemed to have contributed to the promulgation of Tolstoy's spirit, and that the initial recipients are Tula Governor Vyacheslav D. Dudka and Daisaku Ikeda.

[Adapted from an article in the September 13, 2008, issue of the Seikyo Shimbun, Soka Gakkai, Japan]