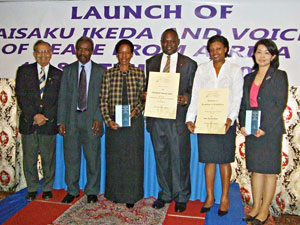 On September 19, 2008, the Writers' Association of Kenya held a book launch for Daisaku Ikeda and Voice for Peace from Africa, a collection of essays by members of the association focusing on the need for peace in Africa and exploring ways of achieving this. The essays were first presented during a two-day Writers' Association of Kenya seminar in June 2007. Launched in commemoration of 2008 Japan-Africa Exchange Year, the book is edited by association Chair and University of Nairobi Professor Henry Indangasi and lecturer Masumi Odari Hashimoto and is published by the Kenya Literature Bureau. It includes a long poem, "Fighting for Peace," by Mr. Ikeda.

In his preface to the book Prof. Indangasi notes the sad irony that the participants of the 2007 seminar, concerned about the broader question of peace in Africa, could not have foreseen that within a few months their own country would be plunged into the worst civil strife of its post-independence history, in which over 1,000 people lost their lives in ethnic-based conflict. The book's message is given added urgency and focus by these events.

Officially launching the book, United Nations Under-Secretary-General and UN-Habitat Executive Director Anna Kajumulo Tibaijuka, stated that she was inspired by Mr. Ikeda's frequent advocacy of the twenty-first century as the "century of Africa" and the "century of women" and called on the audience to inherit this spirit and bring forward more African initiatives for peace.

Dr. Tibaijuka described the potentially catastrophic effects of Africa's rapid urbanization if it is unaccompanied by social progress. She spoke of the important role played by writers--"the conscience of the world"--in raising awareness of the underlying causes of urban conflict and other social problems and helping to secure the necessary commitment to solving them.

Ms. Odari Hashimoto read Mr. Ikeda's acceptance message in which he expressed his belief that the wisdom sought by a world confronting spiritual desolation will be found in Africa. The fundamental transformative energy required to bring about social change, he stated, "is found in the power of language, symbolized in the endeavors of literature, the power of the human voice that is a central and vibrant element in African culture."

In his own remarks, Prof. Indangasi emphasized that when Mr. Ikeda's philosophy is brought to bear, peace comes to mean the way of life as human beings in the truest sense, and not merely a "post-conflict covenant."

[Adapted from an article in the September 26, 2008, issue of the Seikyo Shimbun, Soka Gakkai, Japan]