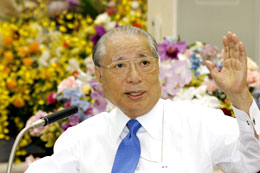 Leaders exist for the sake of the people; leaders should respect and serve the people, making the people's welfare their first priority. This was a central theme of SGI President Daisaku Ikeda's address at the monthly Soka Gakkai leaders meeting on September 30, 2008, at the Soka International Friendship Hall in Tokyo. Our age requires a complete revolution in attitudes of leadership, Mr. Ikeda told the audience. "The essence of Buddhism lies in our behavior as human beings," and thus arrogance or self-conceit in leaders is extreme folly.

Men in particular, he continued, should always act with the greatest respect toward women and young women. It is the efforts of the women members, rooted in the realities of daily life, that have enabled the SGI's Buddhist movement to reach is current state of development, he declared.

During his speech, Mr. Ikeda reported on the construction of several organizational facilities in Japan and abroad, including the recent opening of the SGI-USA Washington, D.C., culture center. He recalled how, following World War II, the Soka Gakkai made its headquarters in a small wooden structure in Tokyo, and that he had pledged at the time to his mentor, second Soka Gakkai President Josei Toda, to develop facilities for the organization throughout Japan and the world. There are currently some 1,200 Soka Gakkai community or cultural centers in Japan and a further 500 around the globe. He described these centers as "citadels for supporting people's lives and spreading happiness and the joy of living, no matter how troubled the times may be."

The SGI leader also reported that he had received notification from a number of universities outside Japan of their intentions to confer honorary doctorates on him in the near future. These honors, he said, are an indication of the high regard in which the SGI movement for peace, culture and education is held around the world. Speaking to the members of the Soka education institutions present, he said that the awards, which he accepted as founder of the Soka School system, are, in his view, bestowed equally upon faculty, staff and students of these institutions.

He expressed his hope that the faculty, teachers and staff would remain true to the founding spirit of the schools, taking fresh and enterprising action to ensure the continued development of the schools while sharing a sense of joy and optimism with the students. "Education is the key to the future. If education goes astray, everything else will follow suit," he stated, affirming the vital importance of education in coming century. "Let's always be bright and upbeat in our interactions with young people," he told the audience.

It is precisely when times are dark and gloomy that people should advance with dynamism and good cheer, making problems a springboard to achieving a more expansive life, he said, quoting the creed of the composer Beethoven: "Out of suffering, joy." "Joy is infectious," he advised the audience, sharing the words of Danish philosopher Kierkegaard: "No one is more capable of giving instruction on the subject of joy than he who is himself joyous." He encouraged the SGI members to brighten and lift the spirits of those around them and to always proceed with courage, and with confidence that there is no adversity that cannot be overcome through the practice of Nichiren Buddhism. He closed his remarks saying, "Please know that I'm always praying earnestly for your happiness and well being. That is my role."