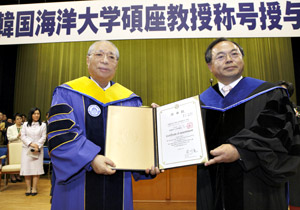 On April 2, 2009, Korea Maritime University (KMU) in Busan, South Korea, presented Daisaku Ikeda, Soka Schools and Soka University founder and SGI president, with a plaque of appreciation for his contributions to strengthening friendship between Korea and Japan, as well as appointing him University Professor of the Korean institute in recognition of his efforts and achievements. A delegation from the university led by President Oh Keo Don and Dean of Students Yea Byeong Deok travelled to Japan to make the appointment, which followed a combined entrance ceremony for Soka University and Soka Women's College. Also in attendance at the ceremony was a delegation of the All-China Youth Federation, in Japan on an exchange visit, and Dr. Michael von Brück, chair of Comparative Religious Studies at the University of Munich in Germany who was on a research trip to Japan.

In his conferral speech, KMU President Oh stated that Mr. Ikeda was being recognized for his dedication to developing diplomatic and cultural relations between Japan and Korea, which have remained strained by the effects of Japanese imperialism during the first half of the twentieth century. Describing KMU's aims to expand the frontiers of maritime study, Prof. Oh expressed his hopes to further academic exchanges between his university and Soka University, and have Mr. Ikeda present a special lecture at the Korean university at some future date.

Established in 1945, KMU is one of the earliest national post-secondary educational institutions in South Korea and has established itself as a leader in ocean exploration and development internationally. It enrolls over 10,000 students in its four colleges--maritime sciences, ocean science and technology, engineering and international studies.

In his speech, Mr. Ikeda referred to Yi Su-kwang (1563-1628), a Korean philosopher, who stated that the eyes serve as the "banner" of the mind: if one views something lofty, one's mind is elevated; if one views something ignoble, one's mind becomes base; if one perceives truth, one's mind will become genuine. Sharing these words with the entering students, Mr. Ikeda recalled his teacher, second Soka Gakkai President Josei Toda, who gave his all to fostering young people and strictly encouraged them, in, for example, their reading habits, to always seek that which is lofty and sublime, and to avoid the influence of the shallow and the vulgar.

Expressing appreciation for the honor from KMU, Mr. Ikeda commended President Oh for fostering capable individuals in the maritime sciences. He commented that Mr. Toda had once described the ocean as a looming obstacle to the faint-hearted but a causeway into the world for youth who continue to challenge themselves. Mr. Ikeda called on the students to advance with cheerful courage and an adventurous and enterprising spirit.

[Adapted from an article in the April 3, 2009, issue of the Seikyo Shimbun, Soka Gakkai, Japan]