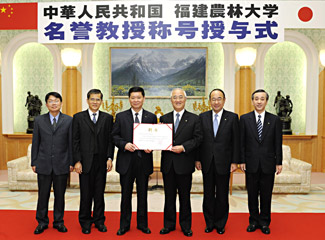 On April 17, 2009, Fujian Agriculture and Forestry University (FAFU), located in Fuzhou, Fujian Province, China, conferred an honorary professorship upon Daisaku Ikeda, Soka University (SU) founder and SGI president, for his contributions to global peace and initiatives that have fostered friendly relations between China and Japan.

At a welcome ceremony, FAFU Vice President Weng Shan-bo, leader of the visiting delegation, expressed hopes that Sino-Japanese relations would be strengthened through FAFU's exchange with SU.

The conferral ceremony was held at the central tower on the Soka University campus in Hachioji, Tokyo. Prof. Weng read the citation and entrusted the honorary professorship certificate to SU President Hideo Yamamoto, who received it in proxy. Soka Women's College President Hideaki Ishii read Mr. Ikeda's acceptance speech, which included a poem in Chinese Mr. Ikeda composed as an expression of his appreciation, weaving into the verse the name of the Fujian university.

Founded in 1936, FAFU is located in Fuzhou City, the capital of Fujian Province, famous for its natural beauty and surrounded by mountains and lakes. The university is well known for its scientific research in agriculture, forestry, environmental conservation and food safety. In particular, its College of Bee Science is one of the best in China. FAFU also imparts cultivation technology to developing nations as part of its humanitarian efforts.

[Adapted from an article in the April 18, 2009, issue of the Seikyo Shimbun, Soka Gakkai, Japan]