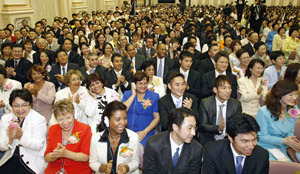 At a monthly leaders meeting held on April 22, 2009, in Hachioji, Tokyo, SGI President Daisaku Ikeda commended the behind-the-scenes efforts of fellow members and spoke on developing lionhearted courage in grappling with adversities we face in the course of our lives. The event commemorated May 3, Soka Gakkai Day and Soka Gakkai Mother's Day, and was held in conjunction with a conferral of the Peace Gold Medal upon Mr. Ikeda from the Sydney Peace Foundation of the University of Sydney, Australia. [See related article.]

Thanking Dr. Rees and the delegation from the Sydney Peace Foundation for taking time from their busy schedules to travel to Japan, Mr. Ikeda said receiving the medal was a privilege and a great honor.

The SGI leader acknowledged representatives of the various groups in attendance, welcoming and thanking the SGI members present from 23 countries and territories. In particular, Mr. Ikeda praised the efforts of those volunteers who deliver the Soka Gakkai newspaper to people's doorsteps every morning. Sharing his own memories of delivering newspapers as a young boy, he said that although the job was demanding, it had been a source of experience and development in his life.

The SGI leader commended the grassroots efforts of Soka women, young and old, remarking that none work harder than they. He urged men to always respect women and to treat them with utmost courtesy. He shared with them the closing lines of a famous poem by contemporary Australian poet Geoff Page titled "Grit," written in tribute to the stalwart mothers of Australia:

. . . I praise each day and evening of [those mothers'] lives--
that hard abundance year by year
mapped in a single word ["Grit"].


Commenting on the inscription "Peace with Justice" on the Gold Medal he had just received, the SGI leader recalled the words of the Australian jurist and political leader H. V. Evatt (1894-1965), a graduate of the University of Sydney and a participant in the drafting of the Universal Declaration of Human Rights. In a 1945 radio address explaining Australia's expectations of the UN, he declared, "We certainly want peace, but we want peace with social justice--a peace that shall afford to the peoples of all countries positive opportunities to lead full and happy lives." "These words," Mr. Ikeda affirmed, "resonate with our ideals of creating peace through upholding correct principles . . . True peace is inseparable from justice, which is why we must fight resolutely against negative forces that obstruct justice and cause people suffering." He said if corruption and injustice go unchallenged, the abuses will only proliferate.

Mr. Ikeda went on to discuss the symbolism of the lion, which frequently appears in Nichiren's writings representing values of courage, dignity, youthful passion and resolve. He shared words of the renowned Australian nurse and physical therapist Elizabeth Kenny (1880-1952), a pioneer of a groundbreaking treatment for the effects of polio, who declared: " It's better to be a lion for a day than a sheep all your life." He observed that the coat of arms of the University of Sydney is emblazoned with a golden walking lion. This courageous, lion-like spirit is all the more important amidst the severe economic crises sweeping across the world, he said, encouraging everyone to persevere and triumph in their current circumstances.

Mr. Ikeda also described how Dr. Reese's late father severely injured his hands in a Japanese torpedo attack during World War II. This had robbed him of, among other things, his love of playing the piano. Expressing his abhorrence of Japanese wartime arrogance, the SGI leader said the country had caused untold suffering to countless people during the war. He expressed his determination to stand against the arrogant and those who "belittle and disdain honest, hardworking ordinary people" and against abuses by those in positions of power who denigrated the people. He expressed his hope that the Soka Gakkai's youth would "work to build Japan into a wonderful country," and ensure that it never repeated its past mistakes. He went on to describe his own and his family's experiences of the destructive effects of war.

The SGI leader concluded his speech by reiterating his sincere gratitude for the accolade he received from the Sydney Peace Foundation, which he said has a profound significance.