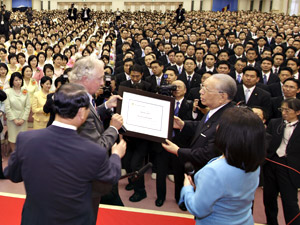 On April 22, 2009, the Sydney Peace Foundation of the University of Sydney, Australia, presented Daisaku Ikeda, SGI president, with its Gold Medal in recognition of his worldwide contributions to nonviolence and human rights education. A delegation from the university led by Professor Emeritus Stuart Rees, former director of the university's Centre for Peace and Conflict Studies (CPCS), traveled to Japan to present the accolade.

Established in 1998 as an initiative of CPCS, the Sydney Peace Foundation is a non-profit organization that serves as a partnership between business, media, public service, community and academic interests, with the aim to promote "peace with justice" and nonviolent solutions to everyday problems and to contribute to the development of civil society in Australia.

In his citation, Prof. Rees remarked that magnanimity and a spirit of tolerance are essential to peace negotiations. He pointed to three values his foundation shares with the SGI and Soka University, which, he said, led to the conferral of the Gold Medal upon Mr. Ikeda: respect and action for nonviolence, universal human rights and education for all humanity.

Remarking that these elements also include a passion for the arts in all its varied forms, such as music, pottery, painting, dance, architecture and poetry, Prof. Rees stated that this last--poetry--is the basis for the friendship he shares with Mr. Ikeda. Quoting excerpts from Mr. Ikeda's poem about Tokyo in 1945, Prof. Rees marveled that even as he refers to postwar Japan as "an era of people drifting through the streets, lost in solitary sadness," Mr. Ikeda hands them a challenge--that it is a "time to fight," to take "the path of peace, the path of truth and justice," and further, that "the challenge of the twenty-first century is to firmly embrace the philosophy of fundamental humanism and to spread it throughout the world." Prof. Rees stated that the passion with which the foundation presented its honor to Mr. Ikeda is encompassed in these lines.

In his acceptance speech, Mr. Ikeda expressed his heartfelt gratitude for the honor and cited two lines from "Grit," a poem by Australian poet Geoff D. Page paying tribute to the stalwart mothers of Australia, as well as words of the renowned Australian nurse and physical therapist Elizabeth Kenny (1880-1952), who developed a groundbreaking treatment for the effects of polio, and Australian jurist and political leader H.V. Evatt (1894-1965), who participated in the drafting of the Universal Declaration of Human Rights. [A summary of the speech will follow in a future article.]

[Adapted from an article in the April 23, 2009, issue of the Seikyo Shimbun, Soka Gakkai, Japan]