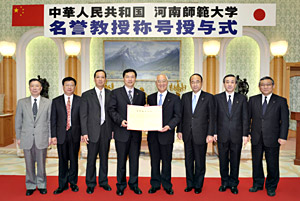 Henan Normal University (HNU) Xinxiang, China, presented Daisaku Ikeda, Soka University founder, with an honorary professorship in recognition of his contributions to world peace, Sino-Japanese friendship, culture and education. The conferral took place in the central tower on the Soka University campus in Hachioji, Tokyo, on April 24, 2009. Professor Zhang Yawei, director of the HNU School Affairs Commission, presented the certificate to Soka University President Hideo Yamamoto, who accepted it on behalf of Mr. Ikeda. Other members of the NHU delegation were: Chief Secretary of the President's Office Zhou Ying Jun, Professor of Japanese Liu Derun of the Faculty of International Studies and Office of International Affairs Director Li Qiufa.

Henan Province, located in central China, is traditionally regarded as the cradle of Chinese civilization and with 100 million people living within its borders, is the most populous province in the country. One of the key universities in the province, HNU, with an enrollment of some 23,000 in its 18 faculties, traces its origins to Zhongzhou University, founded in 1923, and Pingyuan Teachers College, founded in 1951.

In a conferral speech, Prof. Zhang warmly welcomed Mr. Ikeda as a member of HNU's faculty on behalf of the students and faculty. He expressed appreciation for Mr. Ikeda's pioneering efforts for Sino-Japanese friendship. Mr. Ikeda called for normalization of diplomatic relations from early on and has promoted cultural exchanges between the people of China and Japan. He is highly respected in China for his deep bonds of friendship with generations of Chinese leaders.

Mr. Ikeda sent a message extending his heartfelt appreciation for the honor and a short poem composed in Chinese characters, weaving into the verse the university mottoes and Prof. Zhang's name. In the message, Mr. Ikeda expressed his admiration for the school song, which spurs students to "light the torch of youth, open the treasure-house of wisdom, shoulder the hopes of the people and write a brilliant page in your life." He expressed his resolve to work together with other university professors to foster many capable youth through the "sun" of education, while continuing his work to strengthen peace and friendship between the two nations.

[Adapted from an article in the April 25, 2009, issue of the Seikyo Shimbun, Soka Gakkai, Japan]