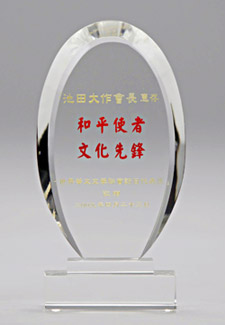 A crystal statuette commending Mr. Ikeda as an "Advocate of Peace" and a "Cultural Pioneer"

The World Chinese Literature Federation (WCLF) recently appointed Daisaku Ikeda, SGI president and poet laureate, an adviser of the federation, as well as of Wen Zong, the federation's literary magazine. He was recognized for his longstanding contributions to peace and literature. The conferral took place on April 25, 2009, at the Seikyo Press building in Shinjuku, Tokyo, where WCLF Executive President Pan Yaoming presented a certificate and crystal statuettes for Mr. Ikeda and his wife, Kaneko, to Soka Gakkai President Minoru Harada. Together with a message, Mr. Ikeda also penned a poem in Chinese characters in expression of his appreciation for the honor.

Mr. Pan was instrumental in bringing to fruition the initial meeting between Mr. Ikeda and Jin Yong, the renowned contemporary Chinese writer and founder of the Hong Kong literary magazine Ming Pao. As managing editor for Ming Pao, Mr. Pan conducted an interview with Mr. Ikeda for the magazine in 1995. Upon reading the interview, Mr. Jin expressed a strong desire to meet with Mr. Ikeda, which was realized in November of the same year. Jin Yong and Daisaku Ikeda subsequently collaborated on a dialogue, published in Japanese and Chinese.

In his conferral speech, Mr. Pan said it was a great honor for the federation to receive Mr. Ikeda as an adviser, sharing commentaries by renowned Chinese thinkers on Mr. Ikeda's work. In a foreword for a traditional Chinese edition of Choose Life, a dialogue between Mr. Ikeda and the British historian Arnold Toynbee, Mr. Jin comments that the dialogue is infused with a philosophy of life that provides valuable hints for humanity's path into the twenty-first century. Mr. Pan shared that Ji Xianlin, a leading authority on Indian and Buddhist studies, observed that Mr. Ikeda's Jinsei sho, a collection of his axioms on life, inspires individuals to progress by infusing in them a spirit of optimism and wisdom, heightening their spirituality and morality, cultivating their sense for aesthetic beauty and empowering them to face difficulties.

[Adapted from an article in the April 26, 2009, issue of the Seikyo Shimbun, Soka Gakkai, Japan]