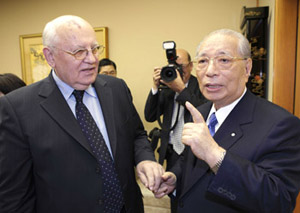 This was the tenth meeting for Mikhail Gorbachev and Daisaku Ikeda. They last met two-and-a-half years ago. (Tokyo, Japan, December 9, 2009)

On December 9, 2009, former Soviet president and Green Cross International founder Mikhail Gorbachev and Daisaku Ikeda met at the Soka International Friendship Center in Shibuya Ward, Tokyo. The Nobel peace laureate was in Japan for speaking engagements at the invitation of Meiji University and other institutions. The two men, who collaborated on the dialogue Moral Lessons of the Twentieth Century originally published in Japanese in 1996, first met in July 1990; this was their tenth meeting. Mr. Gorbachev was accompanied by his granddaughter Anastasia Virganskaya, Gorbachev Foundation consultant Vladimir Polyakov and Pavel Palazhchenko, director of international exchange and head of the foundation's press service.

When the SGI president expressed his sadness that Mr. Gorbachev's late wife, Raisa, could not be with them for this reunion, the visibly moved Russian leader handed him a book of condolence messages he and his daughter Irina Virganskaya had compiled to commemorate the tenth anniversary of Raisa's death to present to close family friends. On the inside cover, Mr. Gorbachev inscribed a brief message of gratitude to "President and Mrs. Kaneko Ikeda, with appreciation for your warm friendship and the profound words of condolence." The first contribution in the book is Mr. Ikeda's essay about Raisa Gorbachev, accompanied by a photo of her waving to students of Kansai Soka Schools during a visit there in 1997. At the time, Mrs. Gorbachev had encouraged the students, telling them that those who keep going despite severe setbacks, believing that there is a task yet to complete and a dream yet to fulfill, will be victorious in the end.

During the course of their one hour meeting, the two discussed the direction of their dialogue currently being conducted by correspondence, of which a portion was serialized in the Japanese literary magazine Ushio from February through April earlier this year. Mr. Gorbachev expressed his delight at the recent publication of a Slovakian edition of Moral Lessons of the Twentieth Century, remarking that he was pleased to have the opportunity to leave behind a meaningful book for posterity. Mr. Ikeda responded that the book has been favorably received in many countries and has been deemed a "textbook for the future" by scholars and educators.

When their discussions turned to the current worldwide economic crisis, Mr. Gorbachev reflected on the history of the twentieth century, remarking that Western countries, considering themselves as victors of the Cold War, had believed their social and political systems to be infallible and without need of reform. The 1980s and 1990s were a period in which "development" came to mean the pursuit of profit at any cost. This thinking has left countless victims in its path, and is what must be corrected, Mr. Gorbachev stated. He expressed his belief that humankind must take lessons from the present financial crisis and transform its basic way of life to create a new standard and world order that stresses cooperation, rather than hostile competition, especially with regard to military might. Mr. Ikeda wholeheartedly concurred, remarking that there is no other path forward than one of humanism.

Referring to the World Women's Awards advocated by Mr. Gorbachev, which recognizes vital contributions by exceptional women in various fields, Mr. Ikeda reflected that women are the driving force behind peace. He noted that his acquaintance, Nobel peace laureate Betty Williams, was the recipient for 2009. Mr. Gorbachev said it was his opinion that in contemporary society and in politics, women take more initiative than men and are more trusted. If women's voices were truly reflected in society, the world would be a better place, he affirmed.

At the end of their meeting Mr. Gorbachev said he placed great value on his friendship with Mr. Ikeda, describing him as a poet and philosopher who draws his strength not from authority but from his character, a profound philosophy and his magnanimity. He also commended Mr. Ikeda on his activities to promote peace and culture. Mr. Ikeda said he was humbled and gratified, and hoped to further strengthen their bonds of friendship.

[Adapted from articles in the December 10 and 12, 2009, issues of the Seikyo Shimbun, Soka Gakkai, Japan]