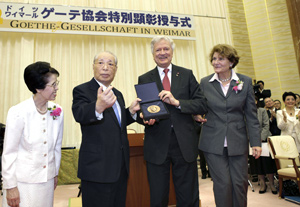 On December 12, 2009, the Goethe Society in Weimar Germany, presented Daisaku Ikeda with a special commendation for his commitment to peace and for his deep understanding and promotion of Johann Wolfgang von Goethe's spiritual legacy. The society explores and promotes the spirit and works of the German writer, playwright, poet and humanist. At a conferral ceremony held at the Tokyo Makiguchi Memorial Hall in Hachioji City, Goethe Scholar Manfred Osten and his wife Uten Osten, representing the German society, presented Mr. Ikeda with a Goethe Medal, one of 12 casts personally commissioned by Goethe in 1816.

Founded in 1885 in Weimar, Germany, where Goethe lived for many years, the Weimar Goethe Society has a membership of some 3,500 in 50 countries and supports a scholarly network that extends not only across Europe, but also to other parts of the globe, including Latin America and Asia. 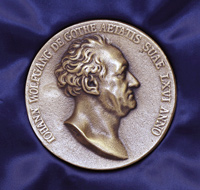 Calling Mr. Ikeda "one of the most loyal friends of Goethe," Dr. Osten, who sits on the society advisory board, quoted from the play "Torquato Tasso" in which Goethe wrote, "He who does not see the whole world in his friends, does not deserve that the world should hear him." Dr. Osten commended the SGI leader for his lifelong tribute to the German humanist, saying, "Like you . . . I am convinced that 'the eternal existence . . . is proved by the idea of activity.' And it is your personal activity in Goethe's sense of peace and humanity which we would like to gratefully commemorate today."

In his speech, Mr. Ikeda described Goethe as a man who dedicated his life to humanistic endeavors, for the sake of others and for society. He remarked that Goethe’s spirit of constant striving toward noble ideals--as exemplified by words such as, "Create unwearied / The useful, the just"--are consonant with the core spirit of Buddhism.