On December 15, 2009, Enrique Díaz de León University (UNEDL), Mexico, presented Daisaku Ikeda, Soka University founder, with its first honorary doctorate in recognition of his contributions as an educator, humanitarian and peacebuilder. The conferral ceremony took place at Soka University in Hachioji, Tokyo, with UNEDL Vice President Claudia Robles Morales attending. A plaque signifying the degree certificate and a commemorative medal were entrusted to President Yamamoto of Soka University, who accepted them on behalf of Mr. Ikeda. 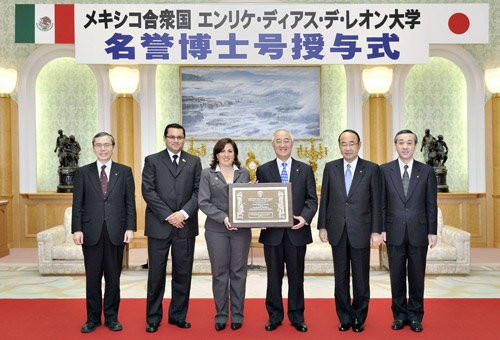 UNEDL is located in Guadalajara, Mexico's second largest city, some 460 kilometers west of Mexico City. Originally established as a high school in 1969, UNEDL was named after the eminent educator Enrique Díaz de León (1893-1937), an advocate of educational opportunities for all. A group of educators established the high school as a place where men and women of all ages and social classes were able to receive a well-rounded education. The institution evolved into the present university, with approximately 7,200 students matriculating in its 12 departments. It also has an affiliated kindergarten, elementary and junior high school.

Describing the ethos of Enrique Díaz de León University in her citation, Vice President Robles said that, more than simply imparting knowledge, UNEDL strives to uphold the dignity of the human being and to advance a culture of peace, ethical values, public service, social responsibility and solidarity based on global awareness. The university also aims to spotlight those with the same values who are dedicated to promoting peace and building a better world. It is for this reason that UNEDL is bestowing its most prestigious accolade upon Mr. Ikeda, Ms. Robles stated. She described him as a person with a deep trust in the innate potential of the individual to bring about change through an inner-directed transformation, and as someone who has engaged in an unremitting struggle to realize lasting peace and promote human solidarity.

In a message, Mr. Ikeda expressed his heartfelt appreciation and said the award represents a profound responsibility. Reminiscing on his visit to Guadalajara in March 1981, he said Mexico has special significance for him because his mentor, second Soka Gakkai President Josei Toda, had dreamed of visiting Mexico, a wish that was never realized. Concurring with the Mexican university's motto, "Guide youth toward the righteous path," Mr. Ikeda remarked that since his youth he has striven to take the correct path of life, guided by his mentor. He lauded the legacy of Enrique Díaz de León for his noble work of opening the path of education to whoever desired it, based on the belief that education is a right and not a privilege. Mr. Ikeda affirmed his commitment to work together with other faculty members for the flourishing of UNEDL, upholding the university guideline, "Education is our destiny; transcending limitations is our mission."

[Adapted from an article in the December 16, 2009, issue of the Seikyo Shimbun, Soka Gakkai, Japan]