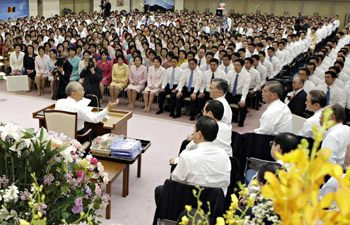 February 11, 2009, marked the anniversary of the birth of educator and second Soka Gakkai president Josei Toda in 1900. During February's monthly leaders meeting in Shibuya Ward, Tokyo, Mr. Ikeda described Mr. Toda as "a great teacher of mathematics, a person outstanding of caliber and brilliant intellect, and of immense courage . . . a leader of tremendous compassion." Mr. Ikeda spoke at length about Mr. Toda and their close relationship, saying that his own life has been motivated by his "vow to let the world know . . . what a truly great man Mr. Toda was" and that his efforts to repay his debt of gratitude to Mr. Toda have led to the growth of the SGI and the worldwide recognition it enjoys today.

Mr. Ikeda met Mr. Toda in 1947, when he attended his first Soka Gakkai meeting at the age of 19. Deeply impressed by Mr. Toda, he decided to join the Soka Gakkai and began practicing Nichiren Buddhism. He also began to work at Mr. Toda's publishing business. When Mr. Toda's businesses began to fail amidst post-war hyperinflation, he exerted himself to keep Mr. Toda from ruin. Mr. Ikeda described this time as a period of "unimaginable hardship," and declared that his success at keeping his mentor safe remains his greatest pride and honor.

To fully support Mr. Toda, Mr. Ikeda quit his college classes. In return, Mr. Toda pledged to tutor him privately in a broad range of subjects. Mr. Ikeda remarked, "As a graduate of what I fondly call 'Toda University,' I have received close to 250 academic honors from universities and other institutions of higher learning across the globe." This, he confirmed, is the result of his unswerving commitment to the path of mentor and disciple. "Buddhism is a matter of proof," he said, quoting Mr. Toda. "Without proof, it's just abstract theory."

Mr. Toda rebuilt the Soka Gakkai after World War II after it had been all but crushed by Japan's militarist authorities. He himself had been imprisoned by the militarist government during the war. In the space of little more than a decade after his release from prison at the end of the war until his death in 1958, Mr. Toda developed the Soka Gakkai into a bourgeoning grassroots Buddhist movement of almost 1 million people.

From his experience of Japanese militarism, Mr. Toda developed an uncompromising attitude toward leaders and was particularly strict regarding the development of leadership attitudes within the Soka Gakkai. He insisted that it is a leader's role to serve and protect people, and that they should continually guard against becoming arrogant. Mr. Ikeda quoted him as instructing the organization's youth to "never yield to the arrogant, to those who look down on others, and those who labor under the delusion that they are great and mighty." Throughout history, Mr. Ikeda remarked, "We have seen arrogant leaders inflict untold suffering on good and innocent people." He said it was the challenge and responsibility of youth to make Mr. Toda's ideal of leadership a reality in society. Mr. Toda, the SGI leader said, placed his greatest hopes on the development of youth and gave his all to encouraging them.

The breadth of Mr. Toda's concern as a leader is reflected in his efforts to foster the organization's young women by developing groups in which they studied world literature, such as Hardy's Tess of the D'Urbervilles, and investigated the meaning of happiness. Mr. Ikeda told the audience that the women of the Soka Gakkai are "the hope and the sun" of the organization, and that valuing and respecting women within the organization is fundamental to the organization's further growth and development.

Describing his serious attitude in learning from Mr. Toda's leadership, Mr. Ikeda said, "Even remarks by Mr. Toda that others took as jokes, I engraved in my heart. I have followed his teachings to the letter. This is the way of a disciple in faith."

Mr. Toda, he continued, "ran" full speed 365 days a year, with the resolve to never waste a single moment, for the sake of the organization's goal of world peace based on individual empowerment. "I have striven with the same spirit," the SGI leader said. "Nothing," he concluded, "is more noble and beautiful than the bond shared by mentor and disciple," and urged the youth to embody a "spirit of justice," which is at the heart of the mentor-disciple relationship.