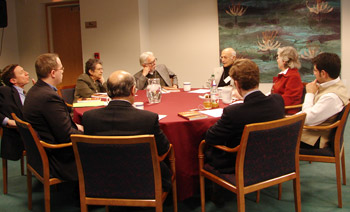 A round table discussion at the BRC on the dialogue between Prof. Yalman and Mr. Ikeda

On February 19, 2009, the Boston Research Center for the 21st Century (BRC)* hosted a seminar at its center in Cambridge, Massachusetts, USA, celebrating the English-language publication of A Passage to Peace, a dialogue between Professor Nur Yalman of Harvard University, and Daisaku Ikeda, SGI president and founder of the BRC. Joining Professor Yalman, a noted cultural anthropologist and an authority on the Middle East, were several of his Harvard colleagues: Islam scholar Shahab Ahmed, Divinity School professor Leila Ahmed, theologian and best-selling author Harvey Cox, Divinity School Dean William Graham, and law professor Noah Feldman, who served as an adviser during the drafting of Iraq's first interim constitution in 2003. 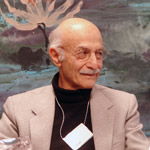 After thanking everyone for attending, Prof. Yalman, a native of Turkey, remarked that he relished the opportunity to explore with Mr. Ikeda the surprising connections that exist between Turkish and Japanese cultures. Making such linkages, he said, functions as a vital rejection of intercultural suspicion and prejudice popularized most recently by Samuel Huntington's "Clash of Civilizations" hypothesis. Ultimately, said Prof. Yalman, valorization of human life is key, and in concert with that notion is an understanding that all killing is unacceptable, even when it seemingly appears to be justified. First of all, according to Prof. Yalman, the path forward consists of keeping "right in front of us" at all times Andre Gide's injunction that "the individual is the most irreplaceable of beings."

During the seminar, participants explored the challenges of pursuing dialogue in a world marked by severe divisions of power and ideology. Among the conclusions was the idea that dialogue is most productive when built upon a commitment to justice and a desire for "human flourishing" in the broadest sense.

[Adapted from a BRC report; photos courtesy of the BRC]