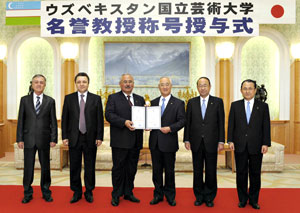 On January 19, 2009, Uzbekistan State Institute of Arts (USIA) in Tashkent, Uzbekistan, conferred an honorary professorship on Daisaku Ikeda, Soka University founder and SGI president, for his promotion of humanistic ideals. The award also recognized the impact of his photography that has been exhibited internationally, including in Uzbekistan. The conferral ceremony took place at Soka University in Hachioji, Tokyo. USIA Rector Usman Karabaev, USIA Dean of Theatre Art Sherzod Pirmatov and Nematjon Sharipov, head of the Educational Institutions Department of the Uzbekistan Ministry of Cultural Sports, entrusted the award for Mr. Ikeda in proxy to Soka University President Hideo Yamamoto.

Founded in 1945 as Tashkent Institute of Performing Arts and renamed in 2007 as Uzbekistan State Institute of Arts, the institute continues to foster talented directors, scriptwriters, actors, playwrights, critics and other professionals involved in performing arts. The institute also engages in exchanges with other art schools in Central and East Asia.

In his citation, Professor Karabaev commended Mr. Ikeda for his contributions to the advancement of global culture as a humanist, global citizen and an eminent figure. He called attention to Mr. Ikeda's longstanding cultural and educational contributions to Uzbekistan and expressed his appreciation for collaborations between Uzbek scholars and archaeologists and Soka University in important archaeological digs at the site of a Buddhist temple in Dalverzin Tepa. Professor Karabaev also thanked Mr. Ikeda for promulgating the ideals of Uzbekistan's celebrated poet and statesman Alisher Navoi (1441-1501). A bronze statue of Navoi presently adorns the plaza in front of the Soka University auditorium. In closing, the rector welcomed Mr. Ikeda as a member of USIA, commenting that the conferral elevates the reputation of his institute and is symbolic of a spiritual solidarity for peace.

In an acceptance speech read by a representative, Mr. Ikeda extended his sincere appreciation for the distinction. Referring to USIA's educational ideal of "humanism in art" and Rector Karabaev's belief that traditional folk cultures play an important role in building a humanistic society, Mr. Ikeda discussed the importance of educational and cultural exchanges for cultivating creativity and promoting friendship for peace.

[Adapted from an article in the January 20, 2009, issue of the Seikyo Shimbun, Soka Gakkai, Japan]