SGI President Greets the New Year with Members Throughout the World 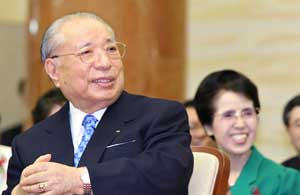 SGI associations throughout the world greeted 2009 with New Year's services. The Soka Gakkai members in Japan gathered on January 1 and 2, 2009, at local centers throughout the country. Daisaku Ikeda, SGI president, attended a New Year's service on January 1 at the Soka Gakkai headquarters in Shinanomachi, Tokyo, together with representative leaders, to pray for the good health, prosperity and success of fellow SGI members worldwide. In his remarks, Mr. Ikeda recounted the struggles of Tsunesaburo Makiguchi and Josei Toda, the first two Soka Gakkai presidents, who stood up for religious freedom against the Japanese military government during World War II and developed the foundation of the Soka Gakkai. Mr. Ikeda asked those present to dedicate themselves further to the happiness and growth of the membership and to expand friendship and a broad understanding of the SGI's objectives.

In a New Year's message to SGI members in 192 countries and territories, Mr. Ikeda described how the SGI was established in 1975 in the midst of his travels to meet with leaders in China, the Soviet Union and the United States in order to promote dialogue during a period of escalating Cold War tensions. This spirit of valuing and encouraging dialogue--"the key to building peace and achieving a victory of our inner humanity"--has been core to the SGI movement since its founding.

Mr. Ikeda described the SGI's mission as that of imparting to society "the energy of courage and the philosophy of hope." Hope and courage, he said, are what humankind requires today in order to develop "a new path of change--for the sake of achieving sustainable development and lasting peace." Furthermore, this movement is "not something abstract or beyond the scope of daily life. It is manifested in our relationships with those in our immediate surroundings, the people around us, in our neighborhoods, communities and societies."

He described his own attitude in his extensive dialogues with individuals of diverse nationalities, religions and ideologies as one of "trying to understand as deeply as possible the other person's thoughts and feelings." He continued, "For all our infinite diversity, we are all human beings. We all face the same fundamental issues of existence--birth, aging, sickness and death. It is no exaggeration to say that dialogue between civilizations is ultimately a dialogue between human beings, one life touching and communicating with another."

The SGI leader went on to quote the ancient Roman philosopher Seneca's idea that the best effects philosophy should have on our lives is to give a "fellow-feeling with all [people]." This spirit, he affirmed, is vitally important today, when human relationships are becoming increasingly superficial and transitory. "We need to establish and expand a network of friendship brimming with mutual consideration and support. Instead of withdrawing into our own shells, we each need to go out and actively contribute to the prosperity and betterment of society."

Characterizing our current global society as one of daunting challenges, including pressing environmental problems and a "once-in-a-century" financial crisis, Mr. Ikeda called on SGI members to have confidence that their unified efforts to contribute to the betterment of their communities are a source of infinite value that are vital to the positive transformation of our age.

[Adapted from articles in the January 1 and 4, 2009, issues of the Seikyo Shimbun, Soka Gakkai, Japan]