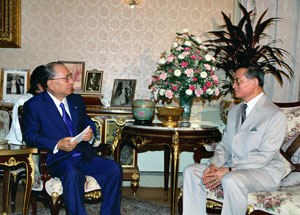 The Religious Agency of the Ministry of Culture of the Kingdom of Thailand recently presented Daisaku Ikeda with its Model Citizen Award for 2008 for his contributions to cultural exchanges between Japan and Thailand. The award, established in 2007, recognizes individuals deemed to have contributed to the creation of a better society and recognized as outstanding role models for youth. The respective provinces nominate the recipient and present the awards on behalf of the Thai national government. Mr. Ikeda was chosen by Nonthaburi Province and is the first foreigner to be recognized for the honor.

At a conferral at the Nonthaburi Provincial Administration Building on January 7, 2009, Governor Cherdwit Ritthiprasart presented the commendation to a Soka Gakkai Thailand (SGT) representative, who received it on Mr. Ikeda's behalf.

Mr. Ikeda has met with HM King Bhumibol of Thailand three times, in 1988, 1992 and 1994. At Mr. Ikeda's suggestion, special exhibitions and concerts highlighting the Thai King's photography, music compositions and paintings have been held in Tokyo and other cities. Most recently, in June 2006, a special showing of the King's photography was held at a Soka Gakkai venue in Yokohama celebrating the 60th anniversary of his accession to the throne. SGT members have held or sponsored a number of cultural events in past years as an expression of their spirit to contribute to Thai society. These include "The Lotus Sutra Manuscripts--The World's Spiritual Heritage," the "World Boys and Girls Art Exhibition," and "Dialogue with Nature," an exhibition of Mr. Ikeda's photographs. In 2007, SGT youth held music festivals at 27 venues, including Nonthaburi.

[Adapted from an article in the February 16, 2009, issue of the Seikyo Shimbun, Soka Gakkai, Japan]