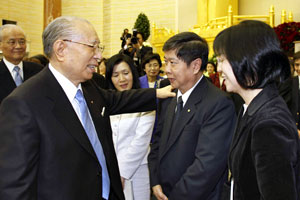 Mr. Ikeda conversing with an SGI member from Thailand

The outward trappings of religious authority are insignificant, "what matters are people, the world and peace." On January 8, 2009, SGI President Ikeda addressed SGI members from 21 countries and territories at the monthly Soka Gakkai leaders meeting at the Makiguchi Memorial hall in Hachioji, Tokyo, welcoming the start of the New Year together with them. The meeting was a combined gathering of the nationwide youth leaders of Soka Gakkai and the Byakuren Group, a young women's group in Japan dedicated to ensuring the smooth running and safety of Soka Gakkai activities.

Mr. Ikeda began by presenting representatives with short poems he had penned as encouragement for members of various ancillary groups within the Soka Gakkai. Offering poems to members of the high school, junior high school and boys' and girls' groups, he told the leaders present that to support and foster the development of youth is the spirit of genuine practitioners of Nichiren Buddhism and the heart of the organization. "Leaders should work selflessly to build the stage upon which the youth can be active. This is the spirit and the way of life of a true Soka Gakkai leader," he said.

Announcing that an oak tree would be planted at the SGI-USA's Florida Nature and Culture Center in honor of young Soka Gakkai members in Japan who celebrate their coming of age this year, the SGI leader urged the youth, "Don't be afraid of storms of tribulation, but grow into mighty trees." He quoted a passage from Goethe's writings: "If it [the oak] grows up snugly sheltered from the wind and weather, it becomes nothing; but a century's struggle with the elements makes it strong and powerful, so that, at its full growth, its presence inspires us with astonishment and admiration."

Mr. Ikeda went on to talk about the 19th-century American industrialist and philanthropist Andrew Carnegie, describing his attitude of valuing and working in partnership with his employees and implementing their suggestions. One of the jobs of leaders is to shine a spotlight on those doing the actual hard work and applaud their efforts, the SGI leader said. He quoted Carnegie's impressions on meeting Abraham Lincoln whose manner was, in Carnegie's words, "as deferential in talking to a messenger boy as to [the secretary of state] . . . revealing in every word and act the equality of men." Genuine leaders, Mr. Ikeda affirmed, "are humble . . . they listen to others and are dedicated to serving them."

Citing a passage from the Japanese classic, The Tales of Genji, "The heart decides what is to become of us. The great-hearted have great good fortune," Mr. Ikeda went on to say that "no matter what hardships we may face, if we remain strong in our hearts, we can break through all challenges. People who live their lives with vigorous optimism will not be defeated."

Speaking of the need to overcome malicious influences in society, Mr. Ikeda quoted the words of Russian author Leo Tolstoy: "Human evil can be overcome by human beings, and . . . this alone is their task and the point of life." Tolstoy, he said, "lamented a society that was ruled by greed and ruthless self-interest, and asserted that the only way that this could be changed was through a spiritual revolution--a change in the hearts of people themselves."

Each person possesses a "sublime power" and purpose; "your individual progress can transform your family, your community, and your society," he said, citing the words of Kenyan environmental activist and Nobel laureate Dr. Wangari Maathai: "Each of us can make a difference, and together we can accomplish what might seem impossible."

Thanking the participants for their attendance, Mr. Ikeda ended his speech encouraging all SGI members, including those struggling with the present financial crisis, to "resolve to be triumphant."