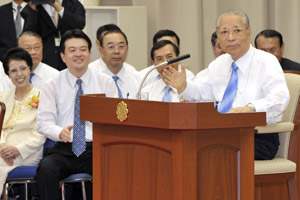 At the Soka Gakkai leaders meeting on July 16, 2009, held at the Soka International Friendship Hall in Sendagaya, Tokyo, Daisaku Ikeda, SGI president, was presented with an honorary doctorate from the Federal University of Rondônia, Brazil. In his speech following the conferral ceremony, Mr. Ikeda spoke of the requisite spirit for tackling great undertakings, drawing on lessons from the life of Brazilian hero Cândido Rondon (1865-8), after whom the university is named.

Rondon is famous for his exploration of the Western Amazon Basin and for building a telegraph network through that forbidding part of the Amazon rainforest. Mr. Ikeda suggested three qualities that had enabled him to succeed in this daunting undertaking. The first was that, particularly at his most difficult moments, he sought guidance and inspiration in the teachings and examples of those he looked up to as his mentors. It was his commitment to a shared dream of the development of the young Brazilian republic, as well as his sense of commitment to people and society, that made him undefeatable, Mr. Ikeda suggested.

Rondon enjoyed the firm support and admiration of many colleagues who stuck with him through numerous difficulties. Mr. Ikeda identified this unity, inspired by Rondon's own dauntless dedication, as a second key to Rondon's success.

The third key to Rondon's success was his "tenacious pursuit of the course of dialogue." Rondon made great efforts to engage the indigenous peoples of the Amazon in dialogue and to promote communication. In this way he made them his allies. Rondon is remembered today for his lifelong support of and respect for Brazilian indigenous populations.

"What is the key to creating a bright and shining future? Courage," the SGI leader asserted. "Those who are fainthearted, weak-spirited, or cowardly, those who are always seeking to curry favor cannot hope to achieve true greatness or accomplish anything of real, lasting importance." Courage and fearlessness, he declared, are the essence of Nichiren Buddhism: "faith is another name for courage."

While everyone experiences hardships of some kind, our challenge, Mr. Ikeda remarked, is "to bring happiness to bloom in our lives, undefeated by obstacles, maintaining a positive outlook, and enjoying good health." This, he said, is the purpose of Buddhist practice. "It is my wish that not a single one of you will ever be defeated by adversity." Buddhism and life, he continued, "are a struggle to secure the values that are good and positive."

Expressing his gratitude to the men for their various efforts, Mr. Ikeda encouraged them not to allow themselves to grow old in spirit, but to strive alongside the youth, to be youthful and continue to win in society. Saying that men face many challenges in all spheres of their lives, he asked them to nevertheless make their way proudly and in high spirits.

Reiterating his thanks to Rector José Januário de Oliveira Amaral and Prof. Célio José Borges of the Federal University of Rondônia, who had travelled from Brazil to confer the honorary doctorate upon him, Mr. Ikeda said that it was his wish to dedicate the honor to British historian Arnold J. Toynbee (1889-1975), with whom Mr. Ikeda engaged in an extensive dialogue and who, he said, treated him like a son, and to first Soka Gakkai president and educator Tsunesaburo Makiguchi (1871-1944).

Mr. Ikeda also expressed his deep admiration for Rector Amaral's efforts as a geographer to safeguard the Amazon. Those who protect the Amazon are protecting the planet as a whole, he said.

Quoting Brazilian author João Guimarães Rosa (1908-67) words "All rivers are new," the SGI leader said that this simple but profound statement is true also of "the river of the heart," and he asked the SGI members to renew their resolve to lead victorious lives, forging ahead with the same invincible momentum of the majestic Amazon.