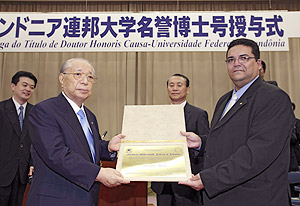 Established as a public university in 1982, Federal University of Rondônia has six campuses, with an enrollment of some 5,000 students. Its main campus in Porto Velho, Rondônia's capital, is situated on the banks of the Madeira River, the Amazon's largest tributary. Many graduates of the university are contributing their expertise to the conservation and sustainable development of the Amazon Basin. Rondônia State is located in northwestern Brazil near the Bolivian border.

Rector Amaral, in the citation, referred to Mr. Ikeda's belief that peace begins in the hearts of people, that culture is a vivid expression of people's ability to cultivate peace, and that education is the way in which this creative force is nurtured; education and culture are therefore key elements in peacebuilding. Mr. Ikeda's vision, he said, coincides with that of the university. Quoting singer-songwriter John Lennon (1940-1980), "A dream you dream alone is only a dream. A dream you dream together is reality," Rector Amaral said that by welcoming Mr. Ikeda as a member of the university, they no longer dream alone.

He stated that the university's selection committee judged Mr. Ikeda to be a worthy recipient of the university's highest honor on the basis of not only his prolific works but also his extensive activities and extraordinary contributions to the establishment of a more humane society.

Mr. Ikeda expressed his heartfelt appreciation to the guests for traveling from Brazil to confer the honorary doctorate, which, he said, he wished to dedicate to educator, geographer and first Soka Gakkai President Tsunesaburo Makiguchi (1871–1944) and the eminent British historian Arnold J. Toynbee (1889-1975). He commended Rector Amaral as a guardian of the Amazon, saying that that those who protect the Amazon rainforest are protecting our planet as a whole. In the course of his speech, Mr. Ikeda quoted Brazilian figures such as Cândido Rondon (1865–1958) who built a telegraph network though western Brazil and writer and journalist Fernando Sabino (1923–2004), who both relentlessly challenged adversities in order to accomplish their goals. He concluded by expressing his hope that Federal University of Rondônia would continue to grow and develop with all the dynamism and power of the Amazon River. [A summary of the speech will follow in a future article.]