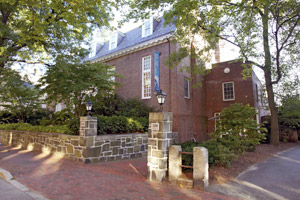 On July 3, 2009, the Boston Research Center for the 21st Century, located in Cambridge, Massachusetts, USA, formally changed its name to the Ikeda Center for Peace, Learning, and Dialogue. Richard Yoshimachi joined the center as president and executive director, succeeding Masao Yokota, the center's first president, who stays on as an advisor.

Virginia Straus Benson, formerly executive director and now the center's senior research fellow, explained the name change on the center's website: "Moving forward as the Ikeda Center for Peace, Learning, and Dialogue, we will deepen and expand our work under a name that more directly reflects our long-standing values and objectives as well as our profound respect for Mr. Ikeda and his inclusive, humanistic vision. With these fresh developments, all of us at the Ikeda Center are more determined than ever to achieve the goal that has always guided our work: a fundamental shift in U.S. and international culture from isolation, violence, and war to interconnectedness, nonviolence, and peace."

Since its founding in 1993 by Daisaku Ikeda as the Boston Research Center for the 21st Century, the center has engaged diverse scholars, activists and social innovators in the search for ideas and solutions that will assist in the peaceful evolution of humanity. Programs include public forums and scholarly seminars that are organized collaboratively and offer a range of perspectives on key issues in global ethics. Each year, a core focus culminates with the annual Ikeda Forum for Intercultural Dialogue, now in its sixth year. The center's books on education and global concerns have been used in more than 600 college and university courses to date.

The center's aims are encapsulated in the mottoes given to it by Daisaku Ikeda on its founding: "Be the heart of a network of global citizens. Be a bridge for dialogue between civilizations. Be a beacon lighting the way to a century of life." It has also drawn inspiration from the humanistic ideas and ideals of Emerson, Thoreau, Whitman and Dewey, the examination of which has been an important focus of the center.

In autumn 2009, the center will host two public events: A booktalk on September 24 will feature Ronald A. Bosco and Joel Myerson discussing the book they coauthored with Daisaku Ikeda, Creating Waldens: An East-West Conversation on the American Renaissance (Dialogue Path Press, forthcoming). On November 14, the 6th Annual Ikeda Forum for Intercultural Dialogue will commemorate the 150th anniversary of John Dewey's birth and examine the naturalistic humanism of John Dewey.

[Adapted from an article in the July 26, 2009, issue of the Seikyo Shimbun, Soka Gakkai, Japan]