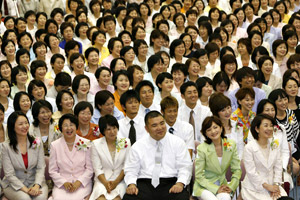 Congratulating the women, Mr. Ikeda commented that it is the efforts of women that have contributed most to the organization's development. He enjoined the male leaders to recognize this fact and always treasure and respect the women and young women.

Addressing the youth, he remarked, "No matter how challenging the circumstances you face, please strive with the resilient spirit to persevere through all and show everyone what you're made of!" People develop by undergoing hardships and struggles, he said, quoting Nichiren's words that, "Iron, when heated in the flames and pounded, becomes a fine sword." He asked the organization's leaders to devote themselves to the development and growth of the youth, saying that nurturing young people's potential is the mark of truly great individuals. The only way to foster people, he said, quoting his mentor, second Soka Gakkai President Josei Toda, is to become a fine example oneself.

Mr. Ikeda introduced the words of Japanese poet Jukichi Yagi (1898-1927), who died at the young age of 29 after contracting tuberculosis, but continued to compose poetry on his sickbed until his demise. He wrote in his diary: "A life without appreciation, a life without self-improvement is death. Self-improvement itself is a strength," and, "Today exists for our self-development. Life is a series of todays."

The SGI leader went on to say, "People shine when they have a sense of appreciation and gratitude and are always striving for self-improvement. Those who have the spirit to keep growing and improving are strong. Since we have been blessed with life, we should dedicate ourselves to some worthwhile purpose." There is no higher purpose, he affirmed than working for the realization of peace and happiness for all humankind.

In a letter to one of his students, Yagi wrote: "Ride on the wings of hope, the wings of idealism, and fly courageously, summoning all of your strength . . . Go. Press ahead. And at all times, whatever happens, never lose that pure sparkle in your eyes." In these words, Mr. Ikeda said, Yagi sets forth the formula for victory in life.

Mr. Ikeda then went on to discuss the words and sentiments of a number of other nineteenth and twentieth century Japanese writers, such as those of Rohan Koda (1867-1947), who wrote, "There is nothing other than diligent effort that creates a better future or makes one's past something beautiful. Steadfast effort is the source of genuine fulfillment in life. It is the key to one's growth as a person. It is the meaning and purpose of life." The greater one's position of responsibility, Mr. Ikeda said, the greater one must exert one's efforts. Constant effort, he declared, is the only way to live a life free of regrets.

Quoting author Takizawa Bankin (1767-1848) about the struggle for justice, the SGI leader affirmed that a society in which good flourishes and justice prevails, the kind of society that people from time immemorial have longed for, is precisely what the SGI movement is trying to achieve. This is why, he said, the movement has won so many allies among thoughtful individuals around the world who genuinely care about the welfare of the people.

Reporting on his ongoing dialogue with former Indonesian president and Muslim scholar Abdurrahman Wahid, Mr. Ikeda turned his remarks to the life and influence of Raden Adjeng Kartini (1879-1904), a pioneer of women's rights in Indonesia and a forerunner of Indonesian independence. Describing Kartini's resolve to weather criticism and ridicule in standing up for her convictions, Mr. Ikeda remarked, "The more women speak out, the more they can improve society. The more women talk with others around them, the more they can promote truth and justice. The courage of women has the power to influence and shape society and change the course of history." When a spirit of genuine respect and support for women is alive in an organization, he said, true unity is possible.