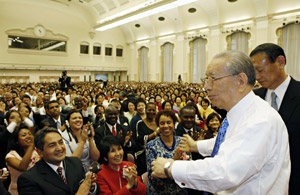 On March 4, 2009, in Hachioji, Tokyo, SGI President Daisaku Ikeda spoke to a gathering of Soka Gakkai leaders from throughout Japan, including youth, and 250 SGI representatives from 60 countries and territories.

Welcoming and expressing his gratitude to those who had traveled from abroad, he introduced an SGI member and educator from Gabon in West Africa, the country's first representative to attend an SGI gathering in Japan.

March 16 marks the anniversary of a meeting in 1958, when, shortly before his death and at formative stage in the Soka Gakkai's development, second Soka Gakkai President Josei Toda entrusted the organization's youth with the accomplishment of Buddhism's core ideal of kosen-rufu--widely spreading the ideals and philosophy of Nichiren Buddhism, particularly the principle of respect for the sanctity of life, for the sake of establishing global peace and bringing about a flourishing of human culture. Mr. Ikeda affirmed again that youth are key to realizing this ideal. "This is a task we must entrust to them. Only they can accomplish it," he said, asserting that he is continuing to focus his attention on fostering young people.

During the course of his speech Mr. Ikeda touched on a number of points fundamental to good leadership, such as the importance of paying careful attention to detail--an effort which, he said, top leaders in any organization tend to neglect as an organization grows. For the SGI, he asserted, this principle comes down to how much care and attention those in top leadership positions are giving to the members, who are working tirelessly on the grassroots level in the forefront of the organization. He warned against the danger of leaders falling into complacency and becoming arrogant or domineering.

"It's the little things that count," he said, explaining that a little extra effort--simply paying attention to the tone of one's voice when speaking with others or addressing a gathering, for example--will always create an improvement. "In most cases," he continued, "people aren't all that radically different from each other or in their abilities. But sometimes even just a subtle shift in a person's attitude or resolve can completely transform them. The human heart is a wondrous thing."

The SGI leader also referred to a past discussion with noted American psychologist, Dr. Martin Seligman, former president of the American Psychological Association and father of the positive psychology movement. Dr. Seligman has written extensively about optimism as a vital attitude in dealing successfully with setbacks or coping with suffering. He described optimism as the ability to not let past failures or disappointments determine one's outlook or expectations. Citing Nichiren's famous encouragement, "winter always turns to spring," Mr. Ikeda declared that Nichiren Buddhism "pulses with an invincible spirit of optimism" and assures that "we all have the power to overcome the most daunting circumstances."

The SGI leader also described facets of the organization's historical development, such as the founding of the Gajokai group comprised of young men who take responsibility for safeguarding the SGI's community centers, and the rigorous instruction he received from his mentor Josei Toda.

Describing the circumstances surrounding the conferral of his first honorary doctorate in 1975 from Moscow State University, he remarked, "I'm a graduate of 'Toda University.' Mr. Toda gave me personal instruction in a broad range of subjects. As such, every award presented to me is an honor that I automatically dedicate to my mentor. I also want you to know that every time I am given such an award, I accept it as your representative and share it with all our members working tirelessly for peace, culture, and education everywhere."

The honorary doctorate, he said, had been awarded in part as recognition for his efforts to promote dialogue between the USSR and China at a time of mounting tension between the two countries. He told SGI members: "To courageously take the initiative to reach out to others in dialogue; to speak to others openly and honestly from the heart--such actions have the fundamental power to break through barriers of prejudice and misunderstanding."