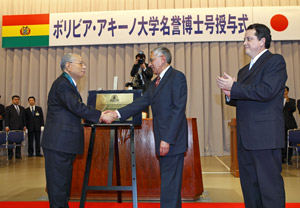 On March 16, 2009, Universidad de Aquino-Bolivia (UDABOL) conferred the title Doctor Honoris Causa upon Daisaku Ikeda, founder of the Soka Schools system and SGI president. The honor recognized Mr. Ikeda for his dedication to promoting a philosophy of universal humanism throughout the world for the sake of peace and the flourishing of society. This was the 249th honorary academic degree awarded to Mr. Ikeda, and the first awarded by UDABOL to an Asian recipient.

UDABOL is Bolivia's largest private university, offering a range of undergraduate, graduate and doctorate programs to the over 26,000 students on its four campuses.

In his conferral speech, Rector Saavedra commended Mr. Ikeda for his steady dedication to advancing education. He expressed his hopes to the graduating students that they would go on to work in partnership with people throughout the world, in the spirit of peace and cooperation fostered by Soka education, to address the problems confronting humanity in the twenty-first century.

Rector Saavedra spoke about the history of UDABOL, which takes its name from Saint Thomas Aquinas (ca.1225-1274), a priest from the Dominican Order of the Roman Catholic Church in Italy whose ideas have had a defining influence on the development of modern philosophy. With founding principles grounded in Aquinas's philosophy, the rector said, UDABOL has continued to train individuals who champion pluralistic coexistence, respect, harmony, dedication, public good, justice and freedom, and the search for truth in every field.

Expressing his gratitude for the honor from the Bolivian university, Mr. Ikeda spoke about Aquinas's belief that among all human activities, the pursuit of wisdom is the most essential and noble, and brings the most profound joy. Mr. Ikeda conveyed his hopes that the students would become great individuals, succeeding in every aspect of their lives while dedicating themselves to society and creating a world of peace.

Mr. Ikeda shared with the students a memory of his meeting with British historian Arnold Toynbee: when he asked the scholar what his goal in life had been as a young boy, Dr. Toynbee responded with a smile that it had been to live up to his parents' expectations by studying hard, and that he had applied himself to his studies with the determination to contribute to the welfare of others. Mr. Ikeda encouraged the young graduates to likewise care for and protect their parents, remembering to express their appreciation in words and to create a bright and cheerful atmosphere in the home.

Concluding, Mr. Ikeda urged the students to develop an unyielding spirit to triumph in the face of any adversity. While setbacks can be devastating, he told them, a seeming "defeat" can be the cause for future success--the crucial thing is to ultimately emerge victorious in life.

[Adapted from an article in the March 17, 2009, issue of the Seikyo Shimbun, Soka Gakkai, Japan]