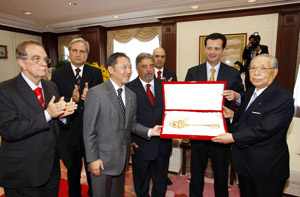 Mr. Ikeda (right) receives the key to the city from São Paulo Mayor Gilberto Kassab (2nd from right), Walter Ihoshi of the Brazil Chamber of Deputies (3rd from left), Adolfo Quintas, assembly member of the São Paulo Municipality (4th from right) and others

On May 13, 2009, a delegation from Brazil presented Daisaku Ikeda, SGI president, with a key to São Paulo City at a ceremony held at the Seikyo Press building in Shinjuku Ward, Tokyo. The city's highest honor, the key was given to Mr. Ikeda in recognition of his worldwide contributions to the development of culture and philosophy. He has visited São Paulo four times, in 1960, 1966, 1984 and 1993, and has contributed to strengthening friendship between Brazil and Japan through cultural and educational exchanges. The Tokyo Fuji Art Museum and the Min-On Concert Association founded by Mr. Ikeda have sponsored numerous exhibitions, performances and lectures showcasing the art, music and dance of each country in the other. Soka University, also founded by Mr. Ikeda, has a longstanding, active exchange agreement with Universidade de São Paulo. Mr. Ikeda has received numerous accolades from São Paulo over the years, including an honorary citizenship in 1998 and the city's Silver Plate in 2008.

During the presentation, São Paulo Mayor Gilberto Kassab commented that SGI-Brazil members have widely contributed to the development of the city into one grounded in humanism and integrity. He said he was pleased to have the opportunity to meet Mr. Ikeda in person and present him with the commendation.

Mr. Ikeda expressed his deep appreciation for the honor, commenting that Brazil opened its borders and doors of opportunities to many Japanese immigrants, for which Japan owes a debt of gratitude. He said it behooves the Japanese to respond wholeheartedly to the generosity and friendship extended by São Paulo and Brazil over the years.

[Adapted from an article in the May 14, 2009, issue of the Seikyo Shimbun, Soka Gakkai, Japan]