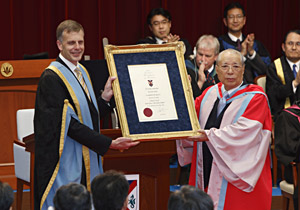 On May 18, 2009, Daisaku Ikeda, Soka University founder and SGI president, received the degree of Doctor of Laws (Honoris Causa) from the Queen's University of Belfast. The honorary degree recognized Mr. Ikeda's longstanding contributions to the promotion of peace and education.

In a citation, Prof. Gregson quoted the words of the great Irish playwright George Bernard Shaw, "Peace is not only better than war, but infinitely more arduous." This, Prof. Gregson went on to say, is "borne out by the life of this afternoon's honorary graduand, Dr. Daisaku Ikeda, who throughout his long career has tirelessly harnessed his skills as a writer, philosopher, an educator and a leader to inspire humanity in the search for peace." He concluded his remarks saying, "Dr. Ikeda's life and work . . . is a lesson to humanity as we strive towards a better future."

Mr. Ikeda, expressing his heartfelt gratitude for the honor, reaffirmed his commitment to dedicating himself to advancing education, which, he said, is the mark of the loftiest human dignity. He also thanked representatives of Soka University and Soka Women's College for attending the ceremony and encouraged them to train their minds, develop their abilities and become individuals of lofty character who are committed to contributing to lasting peace in the world. Stating that true education imparts such values, Mr. Ikeda urged the students to repay their debt of gratitude to those who have supported and inspired them, especially remembering to treasure their parents. He said he was deeply moved by the city of Belfast's motto, Pro tanto quid retribuamus, Latin for "In return for so much, what shall we give back," which he feels embodies a sublime spirit of appreciation--a spirit he hoped Soka University students would emulate.

Mr. Ikeda cited Queen's University of Belfast for its contributions in creating a groundswell for peace during and following the thirty years of civil conflict in Northern Ireland from the late 60s to the late 90s. He introduced words of former chancellor of the university, Senator George J. Mitchell, a key figure in the peace process leading to the Belfast Peace Agreement (the Good Friday Accord), who stated, "There's no such thing as a conflict that cannot be ended. Conflicts are created, conducted and sustained by human beings. They can be ended by human beings." Declaring that education is central to the development of the individual and it is the individual who will create peace, Mr. Ikeda stated that there is no deadlock in humanity's future as long as educators who believe in the innate potential of human beings are united in solidarity. He called on all people to manifest their wisdom and strength and work together to surmount the global crises that threaten humanity's existence; youth, he said, should be the protagonists of this monumental task.

Originally founded in 1845 by Queen Victoria as one of three colleges, in 1908 the college was raised to the status of a full university and renamed Queen's University of Belfast. Queen's, which celebrated its centennial last year, presently has over 25,000 postgraduate and undergraduate students and is a member of the Russell Group of leading research-intensive universities in the UK.

[Adapted from an article in the May 19, 2009, issue of the Seikyo Shimbun, Soka Gakkai, Japan]