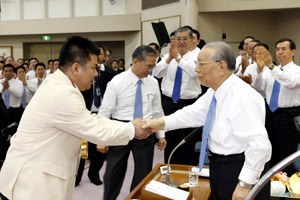 Mr. Ikeda thanks a Soka Gloria Brass Band member who helped the band respond to an impromptu song request

On May 27, 2009, SGI President Ikeda addressed the monthly Soka Gakkai leaders meeting, held in conjunction with a nationwide youth division leaders meeting, in Sendagaya, Tokyo. He opened his remarks saying, "The purpose of our Buddhist practice is to be able to live with self-confidence and dignity, to live true to ourselves and win through all challenges."

"Youth will determine the future," Mr. Ikeda declared. He stated that the aim of the "revolutionary movement" being carried out by the SGI is "to make the spirit of Buddhist compassion the foundation of society. It's a struggle against the devilish nature of power that despises and belittles people."

He recalled his own youthful struggles together with his mentor Josei Toda to develop the Soka Gakkai in its infancy, and from these examples extrapolated principles of Buddhist faith. He encouraged the youth to have a "pioneering spirit," and to take on challenges without being daunted or dissuaded by the negative opinions of others. "Faith, simply speaking, means to make up one's mind. And as long as you're going to make up your mind, make up your mind to succeed!" he said, quoting Mr. Toda. "First decide you are going to win. Then take action to make it a reality," he added.

"Nothing can rival youth," he said, continuing the theme. "Moreover, irrespective of age, we can remain young at heart throughout our lives. The Mystic Law [Dharma] makes it possible to live in such a way that we sparkle with inner youth, no matter how old we are."

The SGI leader noted that May 30th would mark the 35th anniversary of his first visit to China, in 1974. It was during the Cold War and in a climate of enmity between Japan and China that he began taking steps to develop ties of friendship between the two countries. "Any voices of support I may have gained were drowned out in a fierce storm of criticism," he recalled. "My efforts were obstructed and I was targeted with malicious attacks. It was in the midst of this that I made my first visit to China." Since that time Mr. Ikeda has continued to develop friendship between the two countries through cultural and academic exchanges. In recognition of his efforts he has to date received numerous honorary academic awards from universities and institutions of higher learning within China. "I've always acted as a representative of the ordinary people, not as a government representative or a scholar," he remarked.

The SGI president also reported on his dialogue with former Indonesian president Abdurrahman Wahid, one of the country's leading Muslim scholars. He described the ongoing exchange as "a broad-ranging dialogue bringing together Islam and Buddhism."

Addressing the youth again, Mr. Ikeda went on to quote from a letter by the German poet and playwright Johann Wolfgang von Goethe (1749–1832), written when he was young: "I have everything that man can desire, a life in which I daily exercise myself and daily grow." To daily develop and grow, Mr. Ikeda said, is the purpose of Buddhist practice. He introduced other passages from Goethe's correspondence, such as this advice to some young artists: "Don't focus on such things [as baseless, malicious criticism and attacks], just do what you know is right. Otherwise, you can't achieve anything." The SGI leader encouraged the youth, particularly, to continuously take action on the basis of their convictions without being dissuaded. "The important thing is to keep speaking out and remain committed to engaging in earnest dialogue," he affirmed.

Congratulating the Soka University judo team for their success in a national competition, he went on to share some aspects of the philosophy of Jigoro Kano (1860–1938), the founder of modern judo. He remarked that first Soka Gakkai president Tsunesaburo Makiguchi had been a member of Kano's judo dojo. Kano, Mr. Ikeda said, taught the importance of being able to rise above oneself, and that, in Mr. Ikeda's words, "for those who can cast away ego and self-consciousness, all fears will vanish." He closed his remarks urging the Soka Gakkai leaders to strive wholeheartedly while remaining true to themselves.