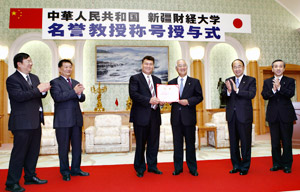 On May 28, 2009, Xinjiang University of Finance and Economics (XUFE) in Urumqi, Xinjiang, China, presented Daisaku Ikeda, Soka University founder and SGI president, with an honorary professorship in recognition of his efforts to strengthen bilateral friendship between China and Japan as well as his extensive contributions to the development of education and culture in Asia. The conferral took place at the Soka University Central Tower. XUFE President Ashar Tursun entrusted the certificate to Soka University President Hideo Yamamoto, who accepted it on Mr. Ikeda's behalf. Among the Chinese delegates were Yang Gang, executive vice chair of the Xinjiang Uygur Autonomous Regional People's Government, and Han Ziyong, vice director of the Cultural Department of the Xinjiang Uygur Autonomous Region.

In his conferral speech, Prof. Ashar welcomed Mr. Ikeda as a new member of XUFE, on behalf of XUFE's 20,000 students and the faculty staff. Calling Mr. Ikeda a global humanitarian and a long-time friend of China, Prof. Ashar commended the SGI leader for his broad understanding of the state of the world community and his pursuit of lasting peace. He expressed appreciation for Mr. Ikeda's dedicated contributions to culture and education in Asia and his pioneering efforts to strengthen Sino-Japanese ties through citizen diplomacy, beginning with his 1974 meeting with Chinese Premier Zhou Enlai.

In a message expressing his heartfelt appreciation for the honor, Mr. Ikeda affirmed his strong commitment to the development of humanistic education and expressed his profound identification with XUFE's founding principle, "People are the starting point." He commented that Premier Zhou had a deep affection for the people of Xinjiang, representing some 50 ethnic groups. Premier Zhou's spirit of cherishing people, Mr. Ikeda remarked, has been inherited by the university and underlies its commendable academic programs. He expressed his resolve to work together with XUFE students and faculty to continue making efforts that contribute to harmony and friendship among people.

Founded in 1950 in Urumqi, the capital and a thoroughfare for the economy and culture in Xinjiang, XUFE is a key institution in the study of economics in the region.

[Adapted from an article in the May 29, 2009, issue of the Seikyo Shimbun, Soka Gakkai, Japan]