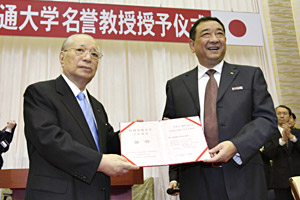 On November 1, 2009, Southwest Jiaotong University (SWJTU) and SWJTU's School of Political Science presented honorary professorships to SGI President Daisaku Ikeda and Mrs. Kaneko Ikeda, respectively. The SGI president was honored for his pioneering efforts to promote peace at the global level and Sino-Japanese friendship. Mrs. Ikeda was recognized for her support of Mr. Ikeda's activities as well as her own contributions to peacebuilding and cultural exchanges among countries, and for being a role model for women. The conferral ceremony took place at the Tokyo Makiguchi Memorial Hall in Hachioji, Tokyo, during a gathering of Soka Gakkai youth and student members. Attending from SWJTU were Vice Secretary He Yun'an; Professor Xian Yuhao, former director of the SWJTU School of Political Science; Professor Zhang Xue-yong, School of Humanities and Social Science dean; and Associate Professor Tian Xuemei of the SWJTU School of Political Science.

SWJTU was founded in 1896 and is located in Sichuan Province. The university has been a leading force in China's modern industrialization and was identified by the Chinese government as one of the country's major universities under the "211 Project" aimed at improving the quality of higher education and scientific research. Currently, 40,000 students study at its three campuses located in Chengdu, the capital of Sichuan, and the city of Emeishan.

In his citation, Vice Secretary He stated that Mr. Ikeda has led the development of postwar Sino-Japanese friendship, extending his amity and respect to the Chinese people. As one who has visited China 10 times and established deep associations with successive national leaders, Mr. Ikeda, he said, has served as a crucial bridge in the promotion of cultural exchanges between the two countries. Vice Secretary He observed that numerous research institutes dedicated to the study of Mr. Ikeda's philosophy now exist in China, an indicator of Mr. Ikeda's far-reaching influence.

Mr. Ikeda expressed his heartfelt appreciation for the honors bestowed upon him and his wife. Reminiscing on his past visits to China, he said that he had an occasion to cross the Great Yangzhe Bridge designed by leading bridge engineer Mao Yisheng, a graduate of Southwest Jiaotong University.

Addressing the students in the audience, Mr. Ikeda encouraged them to build four "bridges" of erudition, filial piety, friendship and victory. Study is a right, not an obligation, he said, commenting that the wisdom gained by such effort is a treasure far more precious than financial wealth. Encouraging the students to become good sons and daughters, he said that children can completely change the atmosphere in a family--especially one undergoing financial or other hardships--through their considerate words and actions in the home. Speaking on friendship, he reminded the students that China is Japan's great cultural benefactor. He shared with them former Chinese Premier Zhou Enlai's belief that individuals should not close themselves off from others, but should jump in among the people and engage in exchanges and conversations, while teaching and learning from each other. Life, Mr. Ikeda said, is a battle to be won, and he encouraged the students to make goals and struggle to achieve them. Nothing is more noble than youth who earnestly struggle on behalf of suffering people and a society mired in turmoil, he affirmed. Mr. Ikeda concluded his speech with his hopes for the young people to win and advance in life with adamant resolve, solidarity and courage.

[Adapted from an article in the November 2, 2009, issue of the Seikyo Shimbun, Soka Gakkai, Japan]