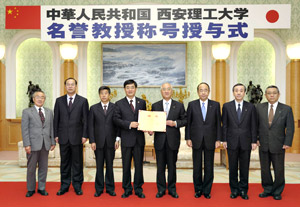 Xi'an University of Technology (XUT) in Shaanxi Province, China, presented Daisaku Ikeda, Soka University founder, with an honorary professorship in recognition of his contributions to Sino-Japanese friendship and for his ongoing work toward realizing lasting peace. The conferral took place by proxy on November 6, 2009, at the Soka University Central Tower in Hachioji, Tokyo, attended by XUT President Liu Ding, Tian Jianing, director of International Cooperation and Exchanges, Li Qingming, dean of Humanities and Social Sciences, and Hidezo Imaruoka, visiting professor at XUT. President Liu entrusted the certificate to Soka University President Hideo Yamamoto. A Chinese poem Mr. Ikeda composed in appreciation for the honor was presented to the XUT delegation.

Xi'an, the capital of Shaanxi Province in China, was known as Chang'an, a cosmopolitan city of one million during the Tang dynasty (AD 618-907). Founded in 1949 and celebrating its 60th anniversary this year, XUT has grown into a comprehensive university enrolling 25,000 students in 13 faculties and 24 experimental research facilities with a focus on the sciences. Several of XUT's engineering-related departments have been designated as departments of excellence nationally. Having academic exchange agreements with four Japanese universities since 1985, XUT has sent 200 students and faculty to Japan and received 400 students and professors from its Japanese counterparts.

In his speech, Professor Liu referred to the historic proposal for the normalization of Sino-Japanese diplomatic relations made by Mr. Ikeda in September 1968. In the proposal, Mr. Ikeda urged Japan to officially recognize the Chinese government and proposed China's entry into the United Nations as a member-state, while appealing for broad-based economic and cultural exchanges. The normalization of Sino-Japanese relations was realized several years later in September 1972 with the signing of a joint statement. Mr. Ikeda took the initiative to promote intercultural understanding, traveling to numerous countries and encouraging peaceful relations through his exchanges with world leaders, including Premier Zhou Enlai and generations of Chinese heads of state, Professor Liu stated. He hoped that by welcoming Mr. Ikeda as part of the XUT faculty, exchanges and collaborations would be strengthened with Soka University and other related academic institutions, thus contributing to the development of XUT's academic and research programs.

In a message read at the ceremony, Mr. Ikeda commended WTU President Liu, himself a graduate of the university, for his educational philosophy of placing the students' interest above all else. He said he had been moved by Professor Liu's send-off speech to the graduating students this past July, in which he gave them three guidelines: (1) Do not avoid menial tasks, and preserve time-honored "ways" of commitment, tenacity and integrity. (2) Embrace far-sighted, lofty goals and aim for excellence in any endeavor. (3) Foster a love of learning and take pride in your alma mater. In these words, Mr. Ikeda said, are encapsulated a philosophy for achieving honor and victory in life. In closing, he expressed his resolve to support the university's humanistic educational endeavors.

[Adapted from an article in the November 7, 2009, issue of the Seikyo Shimbun, Soka Gakkai, Japan]