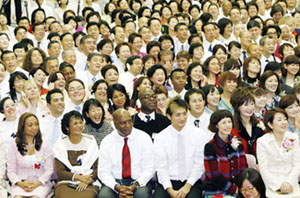 SGI members from 60 countries were among the participants at the November 14, 2009, meeting in Hachioji, Tokyo.

Looking toward 2010, the 80th anniversary year of the founding of the Soka Gakkai, SGI President Daisaku Ikeda proposed three overarching aims for the organization's members. "In Buddhism, the Chinese character for "eight" conveys the meaning of 'opening,'" he said, proposing three shared resolutions: to "open, or expand, our state of life . . . open, or expand, our friendships," and to "open the way to victory." Mr. Ikeda spoke during the 34th SGI General Meeting on November 14, 2009, held in conjunction with the monthly Soka Gakkai leaders meeting at the Makiguchi Memorial Hall in Hachioji, Tokyo. Among those present were 250 SGI representatives from 60 countries and territories.

Elaborating, the SGI President said, "As leaders, the more we broaden our inner capacity, the more people we can help on the path to happiness." Mr. Ikeda encouraged the audience to increase those friends with whom they can speak openly and freely and share a deep trust. Regarding "open the way to victory," he commented, "Buddhism is about winning; its purpose is to enable us to win in every aspect of our lives," adding that "Buddhist practice entails brave and vigorous exertion," as well as courage.

Mr. Ikeda characterized the development of the SGI in 192 countries and territories as an unprecedented achievement in the history of Buddhism, and remarked on the foresight of founding Soka Gakkai president Tsunesaburo Makiguchi (1871-1944) who had envisaged that Nichiren Buddhism would spread throughout the world. "All the credit for the success and achievements of our movement belongs to the members," Mr. Ikeda asserted. "Let's do our utmost to support and encourage our younger members so that they can each shine in their own unique way, so that a new generation of talented individuals has the chance to freely demonstrate their abilities and potential."

Saying that as he enters his later years, he is thinking in great earnest about the future of the SGI movement. Mr. Ikeda affirmed that the "future depends upon whether leaders have this spirit to care and work for the members' welfare."

Describing the importance of upholding solid spiritual and moral values, he remarked, "Sincere people of steadfast commitment shine brilliantly in the end. Arrogant opportunists, on the other hand, never endure for long--this is one of history's eternal lessons . . . failing to live with integrity only leads to self-defeat and suffering."

Mr. Ikeda ended his speech asking those present to take care of their health and make good health their top priority.