Republic of Korea Presents Its Hwa-Gwan Order of Cultural Merit 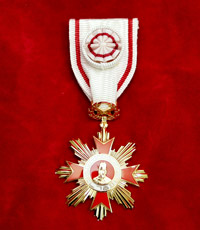 Hwa-Gwan Order of Cultural Merit of the Republic of Korea

The Republic of Korea recently presented Daisaku Ikeda, SGI president, with its Hwa-Gwan Order of Cultural Merit in recognition of his longstanding contributions to Korea-Japan friendship. The conferral took place on November 18, 2009, at the Korea Press Center's International Conference Hall in the capital city of Seoul. Vice Minister Kim Dae-Ki of the Ministry of Culture, Sports and Tourism was among the guests. Also attending were many individuals with whom Mr. Ikeda has developed exchanges, including Dr. Cho Moon-Boo, former president of Cheju National University, President Kim Si-Joong of the Korean Association for the Bereaved Families of the Men of Merit for Independence, and General Director Park Keibai of the National Theater Association of Korea Inc.

The Hwa-Gwan Order of Cultural Merit is one of South Korea's highest national honors. It is conferred upon persons deemed to have advanced the development and flourishing of culture and art and the prosperity of the nation. Every year, the Korean government accepts nominations for the order from public organizations. Mr. Ikeda was nominated by the Korea Specialized Newspapers Association and officially confirmed as a recipient by South Korean President Lee Myung-bak, following a stringent review process. 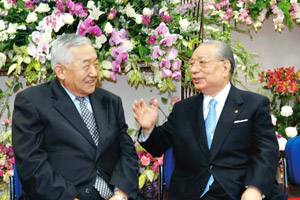 The Korea Specialized Newspapers Association was established in 1964 to protect the impartiality and freedom of the press. The association has long recognized Mr. Ikeda's humanitarian ideals and efforts to advance peace, culture and education. Many of the SGI President's essays and interviews have been published in influential Korean magazines such as the Chusun Monthly and CEO News. His dialogues with world leaders, scholars and activists, such as that with the British historian Dr. Arnold Toynbee, published as Choose Life, have been translated into Korean and widely read.

Mr. Ikeda has worked to actively promote Korean-Japanese friendship and a cognizance of the tragic history of the Japanese encroachment onto the Korean peninsula in the aftermath of the Russo-Japanese War. In a 2001 interview with the Seikyo Shimbun newspaper, Mr. Ikeda, referring to his dialogue with Dr. Cho Moon-Boo, remarked, "I am devoting the utmost effort to our dialogue, hoping that it will help provide the opportunity to bridge the chasm separating our two countries . . . No apology, no act of contrition can ever atone for the atrocities perpetrated against the Korean people under Japanese colonial rule . . . Only when Japan learns to respect the people of Korea and win their trust can this country call itself a truly mature, full-fledged member of the community of nations." Mr. Ikeda's dialogues with Dr. Cho have been published in two volumes. Dr. Cho, who traveled from Cheju Island to attend the ceremony, commented, "It is the greatest honor for South Korea to confer the order upon Mr. Ikeda." [Read full text] 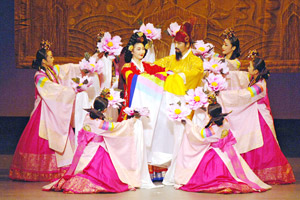 Mr. Ikeda has often called attention to Korea's position as Japan's cultural benefactor and has encouraged cultural exchanges between the peoples of the two countries. SGI-Korea and Soka Gakkai members in Japan have engaged in friendship exchanges for over ten years. In 2002 and 2003, student members of SGI-Korea, together with those of Soka Gakkai in Japan, collaborated on a peace awareness survey among university students at over 120 institutions in both countries. The Min-On Concert Association founded by Mr. Ikeda has sponsored 28 Japan tours of Korean artists, such as the Seensee Musical Company's hit musical "Gambler" in 2005 and the Seoul Performing Arts Company dance troupe in 2006. Dialogue with Nature, an exhibition of nature and scenic photographs taken by Mr. Ikeda in Japan and during his travels abroad, toured nine cities in South Korea and was viewed by over 530,000 people.

During the conferral ceremony of the Hwa-Gwan Order of Cultural Merit, Vice Minister Kim of the Ministry of Culture, Sports and Tourism entrusted the medal and certificate to SGI General Director Yoshitaka Oba, who accepted them on behalf of Mr. Ikeda. Some 180 congratulatory flower wreathes were sent by South Korean Prime Minister Chung Un-chan and leaders from all segments of Korean society in celebration of the conferral.

[Adapted from an article in the November 20, 2009, issue of the Seikyo Shimbun, Soka Gakkai, Japan]