Speaking with students and faculty prior to the conferral ceremony, President He expressed his hope that exchanges between Soka University and Ningxia University would serve to further develop friendly relations between China and Japan. He also remarked that while it is easy to advocate for peace it is difficult to actually lay the foundation for its realization through cultural movements and educational projects, and that he marveled at Mr. Ikeda for his accomplishments in this regard.

The Ningxia Hui Autonomous Region flourished in the twelfth century as the Western Xia Kingdom, a cultured nation that developed its own writing system. Many Buddhist scriptures--among them the Lotus Sutra--were translated into the Xixia language.

Founded in 1958, Ningxia University, whose name means "everlasting peace," is located in Yinchuan, the capital of Ningxia. The Yellow River (Huang He) flows through the city's outskirts, while the Great Wall stretches to the north. The university has been designated as one of the key universities under China's "Project 211," aimed at improving the quality of higher education and scientific research, and was one of the first institutions of higher learning authorized by China's Ministry of Education to accept international students. Currently some 20,000 students study at its 23 schools.

In a citation, President He said the lifetime honorary professorship pays tribute to Mr. Ikeda for his longstanding efforts to raise people's awareness and lay a foundation for good relations between China and Japan. He commented that friendship cannot be achieved unless people both desire it and take action to realize it.

In a message, Mr. Ikeda expressed his heartfelt appreciation for the honor. He praised the legacy of Ningxia University, comparing the university to the Yellow River that is the wellspring of Chinese civilization, and to the hardy Chinese date tree that withstands drought and harsh climates by extending its roots deep into the soil. Mr. Ikeda also remarked on the resourcefulness of the Ningxia people who have grappled with and defied an increasingly arid environment to cultivate abundant crops. During winter in days of old, farmers would haul ice from the frozen Yellow River and bury it deep in the soil, in which they would then plant saplings. Today, he said, it is through the creative research and activities conducted by Ningxia University that the Ningxia Hui Autonomous Region is spearheading the battle against desertification in China. He concluded by stating that he would work together with other faculty members to help foster youth who will shoulder the country's future. 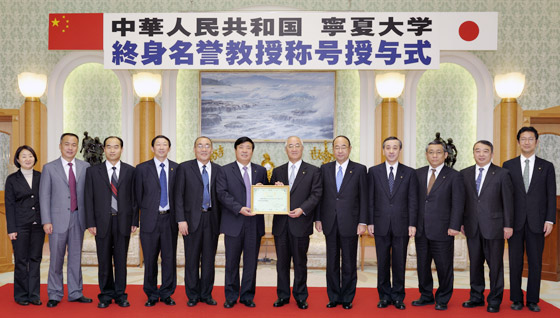 [Adapted from an article in the November 24, 2009, issue of the Seikyo Shimbun, Soka Gakkai, Japan]