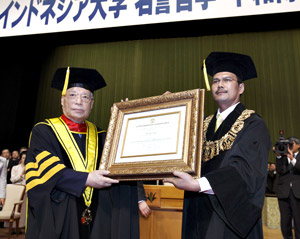 On October 10, 2009, Universitas Indonesia conferred an honorary doctorate in philosophy and peace upon Daisaku Ikeda, Soka University founder and SGI president, in recognition of his peace activism and longstanding efforts to promote dialogue. The conferral took place at the Soka University Memorial Hall on the Soka University campus in Hachioji, Tokyo. A delegation from the Indonesian university, including Rector Gumilar Rusliwa Somantri, Board Trustees Chair Purnomo Prawir, Dean Bambang Wibawarta, International Office Director Raphaella D. Dwianto and representatives of the Indonesian embassy in Tokyo, attended the conferral, which was the first held overseas by the Indonesian university.

Founded in 1849 as the Javanese Medical Doctor School, Universitas Indonesia (UI) is the country's leading state medical university. UI has active joint research and educational exchange programs with many institutions of higher education around the world, including Tokyo University, Peking University and Washington University. UI and Soka University entered into an academic exchange agreement in 1989. The UI's two campuses--the first in Jakarta (Salemba) and the second in Depok (West Java)--boast two of the most ecologically advanced "green" campuses in the world, with 75% of the campus reserved for forestation. To date, more than 400,000 students have graduated from the university.

In his citation, Rector Gumilar stated that as a leader of what may be the largest and most diverse international lay Buddhist association in the world, one characterized by its emphasis on individual empowerment and social engagement, Mr. Ikeda has harnessed the transformative power of Buddhist philosophy for cultivating positive values in education,sustainable development, politics, peacebuilding and religion.

The philosophy of life Mr. Ikeda follows, Prof. Gumilar remarked, is best encapsulated in Mr. Ikeda's own words: "A great inner revolution in just a single individual will help achieve a change in the destiny of a nation and, further, will enable a change in the destiny of all humankind." He lauded Mr. Ikeda for his longstanding and ongoing engagement with the challenges of creating a foundation for lasting peace and for the powerful legacy of wisdom he continues to cultivate for the sake of future generations of youth.

In response, Mr. Ikeda expressed his heartfelt appreciation for the honorary doctorate and his wish to share the accolade with British historian Arnold Toynbee, who, during their series of intensive dialogues during 1972 and 1973, had encouraged him to pursue dialogue with world leaders.

Mr. Ikeda remarked on Universitas Indonesia's motto, veritas, probitas, justitia (Truth, Honesty and Justice), and encouraged the students present at the conferral ceremony to emulate the Indonesian cultural legacies of courage, wisdom and victory. Discussing these virtues, he described the influence of the great Indonesian poet Chairil Anwar (1922-49), who roused his fellow citizens to new social consciousness and responsibility. He spoke also about the multiculturalism of the literary giant Pramudya Ananta Tur (1925-2006) and referred to Dr. Sutan Takdir Alisjahbana (1908-94),who was a progressive writer and the father of the modern Indonesian language, as well as a scholar with strong connections to Universitas Indonesia. Quoting the latter's words, "To live means to struggle. I have already made up my mind that victory is in my hands. Even in the face of adversity, I shall never be defeated," Mr. Ikeda asked the youth to prevail over their circumstances and live true to themselves with a clear vision of their life-long contribution to society.

[Adapted from an article in the October 11, 2009, issue of the Seikyo Shimbun, Soka Gakkai, Japan]