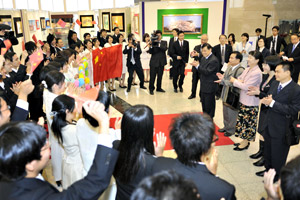 In a citation, Vice President Gao expressed appreciation for Mr. Ikeda's contributions to realizing multifarious friendship exchanges between China and Japan, calling Mr. Ikeda an "old friend of China" and an "ambassador of peace for Sino-Japanese friendship." He also paid tribute to Mr. Ikeda as someone who has worked tirelessly toward the creation of a new world order based on harmonious coexistence and mutual prosperity while pursuing realistic resolutions for contemporary global problems through his continuing dialogues with world leaders and experts in various fields.

In a message, Mr. Ikeda expressed his heartfelt appreciation for the honors presented to him and Mrs. Ikeda. He congratulated Zhongkai University of Agriculture and Engineering on commemorating its 60th anniversary this year. Reminiscing on his first visit to China which began in Guangzhou, Mr. Ikeda said he vividly remembers the warm welcome his party received from Liao Chengzhi, the first president of the China-Japan Friendship Association, the son of Liao Zhongkai. Affirming his belief that it will be the courageous actions taken by youth that will transform the world, Mr. Ikeda said he is resolved to work together with ZUAE faculty members to inspire and foster young people to become outstanding leaders who protect and serve the people.

[Adapted from an article in the October 15, 2009, issue of the Seikyo Shimbun, Soka Gakkai, Japan]