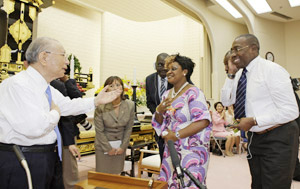 Mr. Ikeda thanks SGI youth from Africa for traveling such long distances to Tokyo to participate in the SGI youth training course

The Soka Gakkai's monthly leaders meeting was held on October 24, 2009, in Shibuya Ward, Tokyo, in conjunction with a nationwide youth division leaders meeting. Among those present were 200 SGI youth representatives from 50 countries and territories who were participating in an SGI youth training course in Japan. Addressing the gathering, SGI President Daisaku Ikeda encouraged the youth to take the initiative in developing the organization in their respective countries.

"History is change, movement, and transformation," Mr. Ikeda said, quoting the Brazilian historian Sérgio Buarque de Holanda: "Youth, in particular, must be agents of change through their own efforts to write a new history."

Discussing Nichiren's statement, "My wish is that my disciples make a great vow," Mr. Ikeda urged the youth to make a lifelong commitment to work toward Nichiren's objective of kosen-rufu, "a noble endeavor to bring happiness to all humanity and peace to the world." Achieving this lofty goal, he said, hinges on youth. "A life dedicated to kosen-rufu is a life of the highest good and ultimate victory," he affirmed, adding that those who devote themselves to this cause come to experience supreme fulfillment, while leading those around them in the direction of happiness.

Mr. Ikeda noted that 2010 also marks the 110th anniversary of the birth of his mentor, second Soka Gakkai president Josei Toda, and the 60th anniversary of the beginning of the private tutoring he received from Mr. Toda, which began after Mr. Ikeda was unable to continue his regular schooling and lasted for a number of years, covering a wide range of subjects. Mr. Ikeda remarked that as a proud graduate of what he called "Toda University," he has gone on to receive numerous honorary academic degrees from around the world.

He also described the rigorous training he received from Mr. Toda in developing his leadership abilities. In light of the many anniversaries to be commemorated in 2010, he referenced a number of key struggles he undertook as a youth together with Mr. Toda, which built the foundation for the organization's present state of development. He urged the current generation of young people to take action with the same unremitting spirit. "Even if you're deadlocked, that's precisely the time you can reveal your true strength and potential," he said, quoting Mr. Toda: "No one is stronger than a person who has stood up with genuine conviction in faith for the sake of the people's welfare."

Expressing his hope that the men of the SGI would be similarly inspired to act with youthful courage, the SGI leader quoted former U.S. attorney general Robert F. Kennedy: "This world demands the qualities of youth: not a time of life but a state of mind, a temper of the will, a quality of imagination, a predominance of courage over timidity, of the appetite for adventure over the love of ease."

Mr. Ikeda closed his remarks by once again sharing advice from his mentor: "Young people mustn't run away from hardship. Rising to the challenge, exerting yourself earnestly, and producing concrete results--all of these efforts will become a great asset for your life."

[Adapted from an article in the October 25 and November 3-4, 2009, issues of the Seikyo Shimbun, Soka Gakkai, Japan]