On October 25, 2009, Dalian Polytechnic University (DPU) in Dalian, Liaoning Province, China, appointed Soka University founder Daisaku Ikeda emeritus professor in recognition of his efforts to build friendship between Japan and China and to find solutions to pressing global issues. Soka University President Hideo Yamamoto, traveling with a delegation from Soka University, accepted the award at a conferral ceremony held on the DPU campus, which was attended by some 400 DPU students and faculty. The event included a screening of a video chronicling Mr. Ikeda's efforts to promote Sino-Japanese exchanges.

In a citation, DPU President Yu Jiayou lauded Mr. Ikeda for his dedication to furthering peace, culture and education and his leadership in advancing global ideals. Professor Yu also commended the Soka University founder for his longstanding contributions to cultural and educational exchanges between China and Japan.

In a message, Mr. Ikeda expressed his profound gratitude for the honor. Quoting a sentiment of DPU Chair Zhang Jiewei, Mr. Ikeda concurred that a professor’s love and compassion for students is critical in fostering scholarship that goes beyond the mere inculcation of knowledge. Mr. Ikeda also reflected on the history of Liaoning Province at the end of World War II, when over one million Japanese poured through Huludao City in a mad rush to board ships bound for home. The kindness of the local Chinese people, despite their ruthless treatment by the occupying Japanese Imperial Army during the war, saved numerous Japanese from dying from hunger and sickness. Mr. Ikeda expressed his resolve to repay this debt of gratitude by working together wholeheartedly with DPU students and faculty to develop lasting peace and friendship.

Dalian Polytechnic University was founded in 1958 as the Dalian Institute of Light Industry. Twenty thousand students, including 1,000 graduate students, are enrolled in its 15 faculties, two educational research institutes, 38 departments and 19 advanced specialized courses. 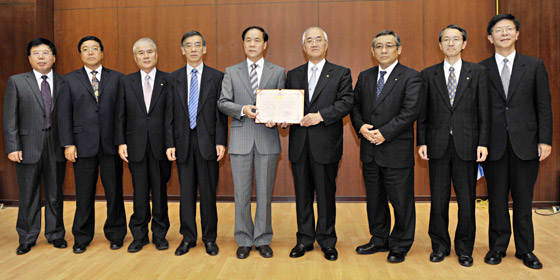 [Adapted from an article in the October 28, 2009, issue of the Seikyo Shimbun, Soka Gakkai, Japan]