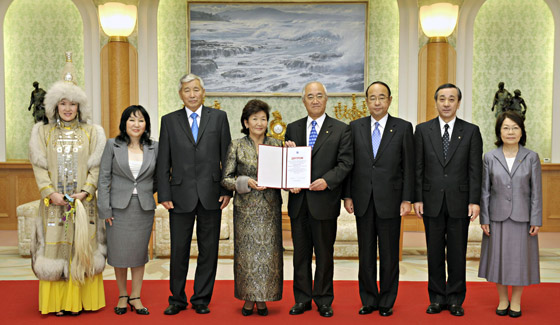 YTT College is located in Yakutsk, the capital of the Sakha Republic in eastern Siberia. It is named after S.F. Gogolev (1896-1933), a famous state and political figure who worked to improve education in his country, and is noted for its excellence in teacher education.

In a citation, Dr. Kopilova expressed her pleasure at presenting YTT College's first honorary professorship to Mr. Ikeda, whose activities, she said, have been a wellspring of educational and cultural exchanges over the past decade. She commented that a recent Japanese language craze in her country is in large part due to the influence of Japanese and Japanese language learning books donated to the YTT College library by Mr. Ikeda.

A traditional Sakha song was performed by a YTT College teacher dressed in a native costume to celebrate the occasion. This was followed by Soka Women's College President Hideaki Ishii reading a message from Mr. Ikeda in which he expressed his heartfelt appreciation for the honor and his intention to dedicate it to the memory of educator and first Soka Gakkai president Tsunesaburo Makiguchi. Referring to the quality diamonds produced by the Sakha Republic, Mr. Ikeda remarked that only a diamond can polish another diamond, and likewise, people can only be enlightened by other people. He affirmed that it is the courage, passion and perseverance of educators that will polish the brilliant gem inherent in the hearts and minds of young people. Mr. Ikeda said he had learned that during World War II, when many of YTT College's faculty and students were drafted to the war front, the college continued to train 245 teachers and 60 pre-school teachers. Among those who received instruction at YTT College were Platon Oyunsky (1893-1939), writer, translator and one of the founders of modern Yakut literature, and S.F. Gogolev, after whom the college was later renamed. It is people who create humanity's happiness, peace and prosperity, and YTT College is an excellent example of an institution dedicated to cultivating people, Mr. Ikeda stated. He concluded his message with his hopes that the college would continue to inspire students one hundred and one thousand years into the future.

[Adapted from an article in the October 29, 2009, issue of the Seikyo Shimbun, Soka Gakkai, Japan]