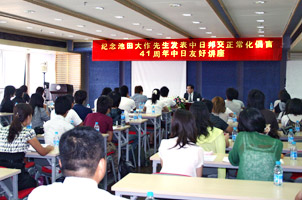 On September 1, 2009, a lecture in Beijing, China, sponsored by the Beijing Office of Soka University, commemorated university founder Daisaku Ikeda's historic September 8, 1968, proposal for the normalization of diplomatic relations between China and Japan. Keynote speaker Professor Gao Haikuan, a member of the Daisaku Ikeda Research Society at Beijing University, lectured on "The Development and Perpetuation of Friendly Sino-Japanese Relations." Participants included Chinese university students, members of the Zhou Enlai and Daisaku Ikeda Research Group at Nankai University in Tianjin, as well as students from Soka University in Japan and Soka University of America in southern California, USA, who are currently studying in China.

Prof. Gao, an authority on Sino-Japanese diplomacy, described the momentousness of Mr. Ikeda's call for normalization of goodwill between China and Japan, announced during a time of bitter hostilities between the two countries. He emphasized that the proposal, made at great personal risk by Mr. Ikeda, significantly influenced breakthroughs in Sino-Japanese friendship and in the normalization of diplomatic ties, and served as a foundation for the current China-Japan alliance.

Prof. Gao also referred to Soka University officially accepting the first six students from communist China to study in Japan, at Mr. Ikeda's encouragement. This, he said, led to the expansion of the Japanese university's exchange programs with a number of Chinese institutions of higher learning and to the deepening of friendship between youth of China and Japan over three generations.

Prof. Gao closed his lecture by citing what he considers to be key for furthering Sino-Japanese relations. This includes building goodwill grounded in mutual respect, trust and cooperation, confronting historical issues head-on, developing a correct understanding of current conflicts, and ensuring the continued cultivation of friendly ties through future generations.

During a Q&A session, when asked by an audience member why he majored in Japanese language at university, Prof. Gao smilingly responded: "My family and acquaintances were all against it. However, my high school principal at the time encouraged me, convinced that China-Japan relations would improve in the future. Now all my family members are studying Japanese."

A Chinese student who attended the lecture expressing resolve to foster friendship with Japanese youth, commented, "As the saying goes, 'Only a narrow channel lies between the two countries.' Sino-Japanese amity is the hope for world peace."

[Adapted from an article in the September 15, 2009 issue of the Seikyo Shimbun, Soka Gakkai, Japan]