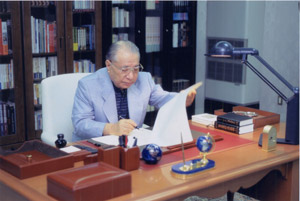 Daisaku Ikeda, SGI president, issued a proposal on September 8, 2009, outlining concrete steps toward the abolition of nuclear weapons. A vocal opponent of these inhumane weapons for more than 50 years, he stresses that we now have a unique opportunity to build grassroots solidarity, propel political processes and break out of the stagnation that has dogged nuclear disarmament and nonproliferation efforts.

The proposal commemorates the anniversary of second Soka Gakkai President Josei Toda's (1900-58) antinuclear declaration made on September 8, 1957, at a large gathering of the Soka Gakkai's youth members. Condemning nuclear weapons and anyone who would threaten humanity's "inviolable right to live" by their use, he declared that it was the mission of youth to work for their abolition. This call became the foundation for the SGI's global peace movement.

Mr. Ikeda targets the double standards operating in the world today regarding possession of nuclear weapons and states that no rational arguments for their retention remain.

Toward building peace and stability in Northeast Asia, he urges that all countries involved in the six-party talks concerning North Korea's nuclear weapons development program declare Northeast Asia a nuclear non-use region, with the goal of making it a nuclear-weapon-free zone.

The proposal will be presented on September 10 at an event during the upcoming Annual UN Department of Public Information/NGO Conference in Mexico City that aims to build momentum toward the 2010 NPT Review Conference.

In 2006, Mr. Ikeda issued a proposal on UN reform, stressing that only a groundswell of public opinion against nuclear weapons will ultimately compel governments to act. In 2007, SGI launched the "People's Decade for Nuclear Abolition" and intensified its awareness-raising efforts, in partnership with other NGOs. [Read summary and download full proposal in pdf]

[Adapted from a September 8, 2009, press release of the Soka Gakkai International Office of Public Information]