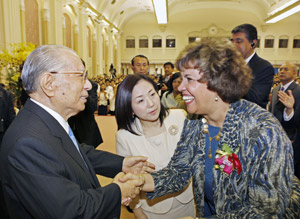 Speaking at the monthly Soka Gakkai Leaders meeting on September 10, 2009, in Hachioji, Tokyo, SGI President Daisaku Ikeda urged the organization's members to begin each day anew, with a fresh and positive resolve. In this way, he said, one can liberate oneself from "lingering disappointment and complaint." A life of nobility and purpose is built by taking one sure step forward after another, he affirmed.

Included among the meeting's participants were visiting SGI members from five countries.

SGI activities, he said, are "a noble form of Buddhist practice in which our thoughts and actions are turned to others' happiness and well-being." He added that "selfless dedication is at the heart of the Soka Gakkai." In this spirit, leaders need to guard against complacency and the inclination to leave the hard work to others. Only when leaders have set an example through their own actions can they call on others to do the same. Leaders who do not take on difficult work themselves but manipulate others into doing it will never grow, he said. "In fact, their inherent abilities will stagnate and decline" and they will "undermine the very foundations of the organization." He added that it is precisely because he has always exerted himself with all his might that he has been able to achieve what he has.

Leaders, the SGI president continued, need to develop strength and ability to triumph over the harsh realities of life. He expressed his hope that SGI leaders become the kind of people who "at the very first encounter, bring people joy and peace of mind, sweeping away their pain and suffering."

The Power of Dialogue

Quoting Nichiren's words, "the voice does the Buddha's work," Mr. Ikeda asked the SGI members to make a point of meeting with others, enjoying conversation and friendship and offering encouragement and support. He encouraged them to strive to be warmhearted individuals who can genuinely communicate with others.

The SGI president shared a number of quotes from his mentor, second Soka Gakkai president Josei Toda, on the fundamental attitude of faith for overcoming difficulties. He described Mr. Toda as person of "incredible conviction in the power of faith" and "a great leader who had tremendous compassion for others." "Faith," Mr. Ikeda affirmed, "is the key to everything," and "faith is another name for courage."

Mr. Ikeda also reported on the upcoming publication of his dialogue with Argentine human rights activist and Nobel Peace laureate Dr. Adolfo Pérez Esquivel and spoke about a dialogue that he is currently conducting through correspondence with former Indonesian president Abdurrahman Wahid. The serialization of this latter dialogue is scheduled to begin in October 2009 in the Soka Gakkai-affiliated monthly magazine Ushio, under the title of "Principles of Peace, Wisdom and Tolerance--An Islamic-Buddhist Dialogue."

[Adapted from articles in the September 11 and 14, 2009, issues of the Seikyo Shimbun, Soka Gakkai, Japan]