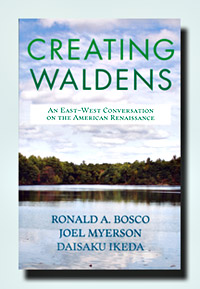 On September 24, 2009, more than 75 Boston-area community residents gathered at the Ikeda Center for Peace, Learning, and Dialogue in Cambridge, Massachusetts, USA, to hear professors Ronald A. Bosco and Joel Myerson offer reflections on their newly published dialogue with Daisaku Ikeda, Creating Waldens: An East-West Conversation on the American Renaissance. Mr. Ikeda sent a personal message that was read at the event. [Read full message on the Ikeda Center site]

In his message, Mr. Ikeda shared how, in the aftermath of the horrible events of September 2001, he renewed his own commitment to dialogue as the true path to peace, especially when it is powered by the "poetic power of the imagination," which "can create portals of hope and discover entranceways for exchange in the massive walls that divide our world." He described his wish at that time to begin exploring together with Professors Bosco and Myerson "the wellsprings that would sustain a renaissance of life," uncovering the lessons that the American Renaissance holds for our time.

Professor Anita Patterson of Boston University offered her reflections on Creating Waldens, setting the stage for the discussion to follow by citing sections in which Profs. Bosco and Myerson explore the profound benefits that can accrue for people when they adopt an attitude of reverence and respect for nature and poetry alike.

During their remarks, both Profs. Bosco and Myerson shed light on the imperative suggested in the title of the book: that each of us is called upon to create our own Waldens. Speaking of the legacy of Emerson, Thoreau and Whitman, Prof. Bosco said he found it "incredible" that even despite their largeness as historic and literary figures, "not one of them insisted that the path that they modeled is the path that we should follow." Prof. Myerson reflected that each of us, following the example of the book's subjects, has a responsibility to discover our best selves, and to share our truths with the world. Both authors, as well as Mr. Ikeda in his message, emphasized the importance of this action for young people, who are beginning to take responsibility for a world facing many challenges.

[Adapted from a report of the Ikeda Center for Peace, Learning, and Dialogue: www.ikedacenter.org]