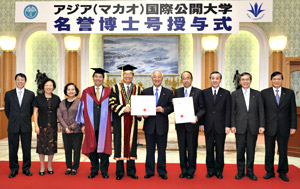 Rector Yan (5th from left) entrusts the certificate of honorary doctorate for Mr. Ikeda to Soka University President Yamamoto (5th from right) while Admin. Council Chair Wong (4th from left) and other AIOU delegates look on

On September 24, 2009, Asia International Open University (Macau) (AIOU) presented an honorary doctorate of philosophy to Soka University founder Daisaku Ikeda in recognition of his longstanding dedication to building world peace and a harmonious global society. A delegation from AIOU headed by Rector Yan Ze Xian and AIOU Administrative Council Chair Wong King Keung was present for the ceremony, held at the Soka University Central Tower in Hachioji, Tokyo. On the same occasion, Mrs. Kaneko Ikeda was appointed honorary librarian of the AIOU campus library for her contributions to advancing women's prominence in society and to peacebuilding. Soka University President Hideo Yamamoto accepted the awards on behalf of Mr. and Mrs. Ikeda.

In a message, Mr. Ikeda expressed his heartfelt appreciation for the accolades from AIOU to Mrs. Ikeda and to himself. He also thanked students from Macau studying at Soka University for their attendance. Sharing words of the Chinese thinker and reformer Zheng Guanyin (1842-1922), who had a strong affinity for Macau, Mr. Ikeda concurred that school is where capable people are fostered and that such people are the strength of a nation. Capable individuals, he said, are responsible for fostering other capable persons, ensuring a ceaseless succession of talent into the future. Commending Prof. Wong, who was instrumental in the launch of AIOU, Mr. Ikeda commented that it takes a fellow founder to truly understand the difficulties of establishing a university. In closing, Mr. Ikeda expressed his hopes for AIOU to initiate a fresh departure toward the next ten and then one hundred years, serving as a colossal golden bridge which many talented individuals will cross to build bonds with the global community.

[Adapted from an article in the September 25, 2009, issue of the Seikyo Shimbun, Soka Gakkai, Japan]