Daisaku Ikeda was recently honored by two Brazilian institutions of higher learning in Maranhão State. The Maranhão School of Government conferred an honorary professorship upon Mr. Ikeda, and the Maranhão Institute of Socioeconomic and Cartographical Studies appointed him an honorary researcher. The conferral took place on September 26, 2009, at the SGI-Brazil Ikeda Culture Center in São Paulo, Brazil. SGI General Director Yoshitaka Oba, visiting Brazil as part of an SGI delegation from Japan, received the accolades on Mr. Ikeda's behalf. 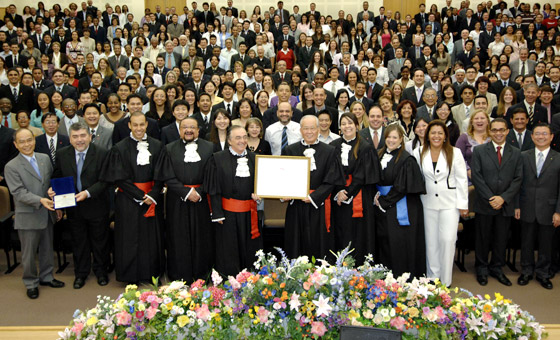 During the ceremony, it was also announced that Centro Universitário de Goiás, known as Uni-Anhangüera, would be offering a course on Daisaku Ikeda's writings.

The Maranhão School of Government was founded in September 2001 in São Luís, the capital of Maranhão State, with an aim of fostering public policy leaders and citizens with ethical values grounded in democratic principles. The school has ten locations in Brazil, including the Center for Public Policy Research at the University of São Paulo. The Maranhão Institute of Socioeconomic and Cartographical Studies, also based in São Luís, is an independent corporation under the jurisdiction of the State Planning and Budget Agency.

In a citation, Maranhão School of Government General Director João Batista Ericeira said that over 30 years ago, he had chanced upon Choose Life, a dialogue between Mr. Ikeda and the British historian Arnold Toynbee, and had been powerfully struck by the perspectives presented in the book. He described the dialogue as a search for a unifying philosophy that transcends variances in economics, politics, technology and military might and provides a basis for global solidarity. Dr. Ericeira suggested that the two men's insights and ideas are astutely relevant to present-day society and should be revisited.

As someone engaged with law, mediation and questions of morality, Dr. Ericeira said he found in Mr. Ikeda's perspectives a broad morality grounded in a keen understanding of universal human rights and the relationship between human beings and the natural environment. He was impressed, he said, by Mr. Ikeda's expansive sensibilities, characterized by empathy, tolerance and respect for cultural diversity. In western culture, the concept that encompasses these traits is called "love," and in a Buddhist context it would be "compassion"--a fundamental spirit of love, peace and solidarity necessary for the cultivation of our humanity. Dr. Ericeira further remarked that Mr. Ikeda was an advocate of sustainability long before it became a popular cause of environmental groups.

Dr. Ericeira declared that it was with great appreciation for his contribution to humanity of a fundamental morality necessary for the preservation of the Earth that Mr. Ikeda was being honored by Maranhão School of Government.

In an acceptance speech read at the ceremony, Mr. Ikeda expressed his profound appreciation for the accolade, stating that he would like to share the honor with first and second Soka Gakkai Presidents Tsunesaburo Makiguchi and Josei Toda, as well as with the Arnold Toynbee. He said he desired to work together with the faculty of the Maranhão School of Government, of which he has become a member, to continue paving a path of hope for the sake of Brazil and the world's youth.

[Adapted from an article in the October 2, 2009, issue of the Seikyo Shimbun, Soka Gakkai, Japan]