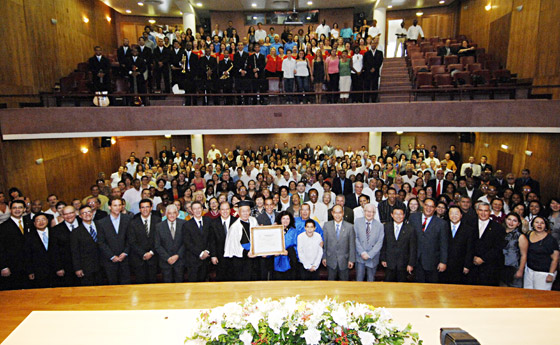 Silva e Souza Integrated College has pioneered architectural instruction in Rio de Janeiro, developing out of the prestigious Pedro I School founded in 1933. The college's brightest students receive training at the office of renowned Brazilian architect Oscar Niemeyer, 101 years old, whose works include the President's Office and the National Congress of Brazil in Brasilia City. Mr. Niemeyer, together with notable architect Le Corbusier, was also a member of an international committee of architects who designed the United Nations building in New York, USA.

Representing Mr. Niemeyer, his grandson Paul V. Niemeyer was among several guests who spoke during the ceremony. Others included Dr. Ronaldo Rogério de Freitas Mourão, a renowned Brazilian astronomer who collaborated on a dialogue with Mr. Ikeda, and Brazilian Academy of Philosophy President João Ricardo Moderno, who have met Mr. Ikeda in Tokyo.

In the citation, Rector Oliveira remarked that it was an honor to present the award to Mr. Ikeda, who has continued to advocate for peace following in the footsteps of his mentor Josei Toda, the second Soka Gakkai president. She called Mr. Ikeda a great individual who has dedicated his life to the creation of a peaceful and harmonious society while challenging to restore the values of education, sustainability, culture and human rights. She also expressed her appreciation for the efforts of the SGI-Brazil members who are contributing to their local communities and opening a new path for society.

In an acceptance message, Mr. Ikeda expressed his heartfelt appreciation for the honor. He shared the sentiments of his friend, the late Austregésilo de Athayde (1898-1993), president of the Brazilian Academy of Letters, who described education as the effort to help another person build a foundation from which to surmount hardships in life. Education, he said, provides the means for people to achieve an inner revolution and enables them to work together for the prosperity of their communities and society at large. Mr. Ikeda expressed his determination to work in tandem with the other faculty members to create a new global community in which humans can tap their potential and live true to themselves.

[Adapted from an article in the October 4, 2009, issue of the Seikyo Shimbun, Soka Gakkai, Japan]